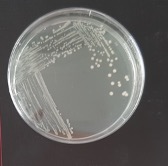 How and why does multidrug resistance evolve?

A love of all things microbial is what drove me to the University of Manchester, where I began my studies as a MSc Medical Microbiology student. We were taught how to identify and test bacteria in a number of different ways that would allow us to identify causes of infection and find the best route to treating it. During my Dissertation Project I was given the opportunity to work with Dr Danna Gifford and Dr Chris Knight to phenotypically characterise and develop antibiotic resistance profiles for 100 clinical multidrug resistant strains of E. coli collected from Greater Manchester. It was fascinating to see how the same species of bacteria can grow and (mis)behave so differently and I found myself wanting to know as much as I possibly could about this collection of strains.

To find out whether the cost of resistance exists among a multidrug resistance clinical collection of E. coli, we looked at resistance on a phenotypic and genotypic level. We began by exposing them to a series of clinically relevant antibiotics. They were grown on antibiotic-containing agar to provide a definite yes/no to growth in presence of antibiotics. They were then sent for whole genome sequencing (WGS) and their genomes analysed to develop a profile of resistance genes and mutations carried by each strain. (Which for a girl who had only ever used her laptop for Microsoft Word, was a huge learning curve!) By doing this, we could compare the growth of the E.coli in an antibiotic-free environment to the number of resistances it carried both phenotypically and genotypically. Between these two methods of characterising resistance, we observed no negative impact of carrying resistances on the strain’s growth in an antibiotic-free environment. Thinking about what this means, it implies that terminating antibiotic therapies may not produce the intended decline in prevalence of strains resistant to those antibiotics. As such my data poses more question that answers! Questions which as an AMR community we work together to answer.

What is next for my PhD? I know which antibiotics these strains are resistant to and how they grow in different environments: Using these well-characterised strains I can next begin testing how resistance evolves in each of these strains as a function of their pre-existing resistance and their fitness. The next stage of my project therefore will expose a subset of the strains to slowly increasing concentrations of antibiotics to quantify the rate and mode by which these clinical strains gain new resistances. By moving my research in this direction we will be able to see how resistances are maintained and multidrug resistance develops in clinical populations of E.coli.