A revolutionary smartphone app that acts as a real-time log to support patients throughout their treatment and to improve adherence to medication. 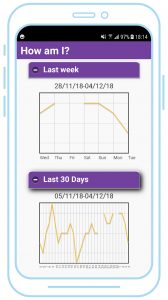 Affecting one in a hundred people in the UK, psychosis can be triggered by mental or physical health conditions such as schizophrenia or Parkinson’s disease, or as a result of drug or alcohol abuse.

Psychosis has a high relapse rate and can have a profound impact on day to day lives. 70% of costs associated with severe mental health disorders are a result of unplanned inpatient admissions.

It is reported that earlier intervention in episodes of psychosis has the potential to save the NHS £119 million over three years, as well as improving the care and lives of patients across the country.

The project set out to improve the care and lives of patients and to lower rates of unscheduled and emergency hospital admissions.

Through a £1 million award from the MRC, investigators at The University of Manchester co-designed the ClinTouch smartphone app for people with psychosis to encourage self-management of care, improve the relationship between patient and doctor and reduce serious episodes from occurring.

The app works to improve adherence to medication by detecting environmental and lifestyle triggers, reducing the risk of relapse. Users are prompted throughout the day to respond to a series of questions, which then trigger a unique branch of follow-up questions.

By incorporating real-time updates into care pathways and alerting clinical teams of significant changes in symptoms, a personalised pattern of early warning signs for relapse emerges.

Responses can then be discussed at the patient’s next appointment, or immediate intervention can be taken by healthcare professionals if necessary.

A series of MRC-funded trials have confirmed the project’s safety, validity, feasibility and acceptability.

The Digital Health Software team developed the ClinTouch app and the web-based interface for clinicians/researchers. We also implemented the algorithm that performs patient risk stratification.

We worked closely with the research team throughout all stages of the project. Several members of the Digital Health Software team have been subsequently involved with the spin-out of ClinTouch into Affigo CIC.

ClinTouch has been built into an end-to-end system in two NHS mental health trusts, streaming summary data into electronic health records and making them available to clinicians and other health care professionals.

The project team has explored models to scale up the science behind the app with international leaders in the pharmaceutical industry. ClinTouch was also the subject of a meeting hosted at 10 Downing Street to discuss the impact that digital technology could have on improving health across the UK.

The systems and digital infrastructure that support ClinTouch are now platforms for related programmes, including a project for treatment by digital cognitive behavioural therapy (the MRC-funded Actissist trial) through a mobile app. It has also provided a foundation for the Arthritis Research UK (now Versus Arthritis) and CLAHRC Greater Manchester-funded REMORA project for the remote monitoring of pain in rheumatoid arthritis.

If you would like to discuss how the Digital Health Software team can help with your project, please get in touch by contacting us.