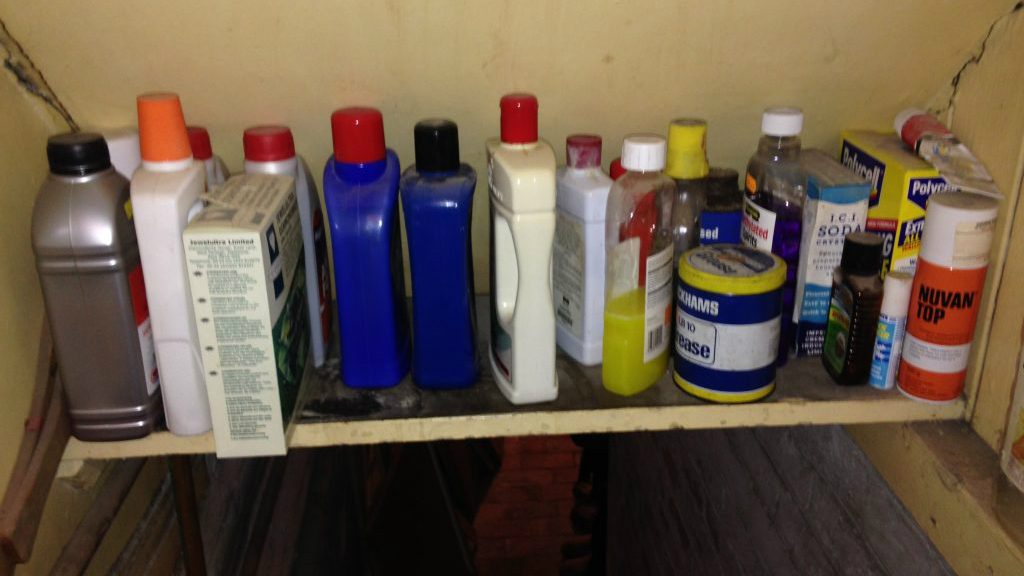 Cellar shelf of rarely used and never to be touched bottles

This is a shelf on the way down into the cellar – quite handy as you don’t have to go all the way down into the cellar to get things off it, a mix of things I use very occasionally and things I never touch. I mostly keep things for the car on here, but there seems to be other things here as well. Things for the car include car oil, shampoo for the car  – which I have never really used, but you never know when you might – and also some car grease. There’s several bits from our previous cars – such as cleaner, which we have put on the shelf here never to be used again.

There is also stuff for decorating which gets mixed in with it – some sugar soap which is used as cleaner for paint work – as well as some ant powder. All the essentials for living in the UK! No idea if I will use it, but I daren’t throw them away. Just in case – you never know when you might need ant powder!  I’ve even got a bottle of stuff for getting rid of cat’s fleas and we don’t even have a cat anymore. There’s a bottle at the back which is probably pretty dangerous, don’t think I want to go anywhere near that now!

Hoard of unused keys in a dormant things stash
The extended life of denim shorts: loved and repaired, worth little on ebay
Drawer of memories: old photos and children's pots