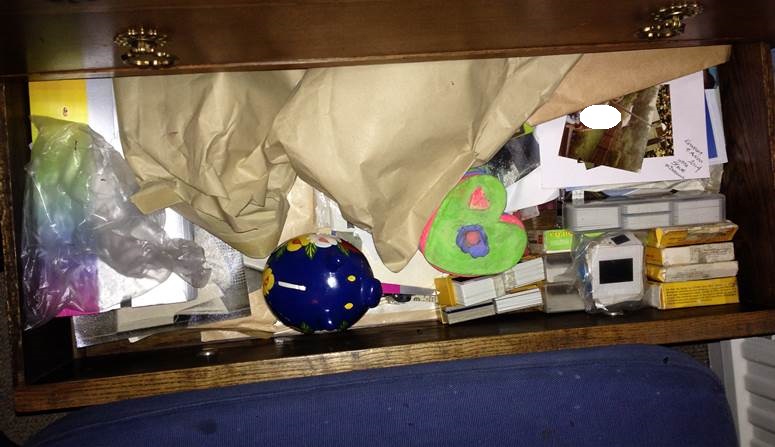 This is a drawer in a bureau in my front room. At the top there is a blue pig money box – it’s broken, painted in canal decorations. A lot of stuff is in here because we were decorating last year so we wanted it all off the top of the bureau. The green heart shaped little pot is something that my eldest daughter made when she was at school, I didn’t know what the things inside it were, but when I opened it I found some old paper clips and various other things. I can’t throw it away because it’s hers. I had forgotten all about it though.

Most of the things in here are photographs which at one time would have been sorted into date order. We need to sort them out and put them into albums. We will do that one day. Also in the drawer are some old 16 ml films of my oldest son when he was a baby and we need to send those away and get them put onto video. He was so sweet! Next to the film there are also a lot of old slides of photos. I guess we need to do the same with these – have a look at them and decide. We haven’t got round to doing it yet but we probably will, although it may be what my children inherit – photographs to sort! These things will stay in here until I decide to do something about them.

Hoard of unused keys in a dormant things stash
Unsuitable Hair sprays: nowhere to get rid of them
Teenager's desk drawer: letters from old friends