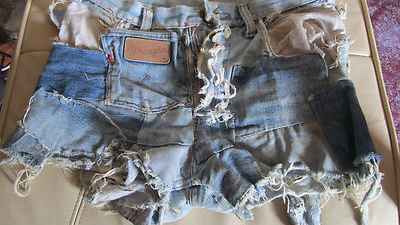 The extended life of denim shorts: loved and repaired, worth little on ebay

These started off their life as a pair of 1974 flared Wrangler jeans, 30W 34L when I was a student.  The patches came next when they started wearing out and were inspired by the picture on the cover of the Neil Young album ‘After The Goldrush’.  All were sewn on by my Grandmother, sadly deceased, and much to the disdain of my mother who just couldn’t understand why I didn’t just throw them away and buy a new pair of jeans – Philistine.

Anyhow I didn’t really grow up and they started to disintegrate and ended up as shorts that I regularly took on holiday abroad until my wife got so p*ssed off that she hid them in about 1995.  Well, we were having a new copper cylinder fitted and the plumber asked if he could use this old rag to catch drips aaaaaaaaaargh my shorts.  Now I know where my wife had hidden them.  They don’t fit as they are still 30w, and I’m not, apart from the fact that they are brief.

As a joke my wife said stick them on bloody Ebay and see what the rest of the world think, you will see just how bad they are.

Well they did go on Ebay and I got £1.70 for them, and exchanged a few e mails with a guy who wanted to relive his youth, I am 61 by the way and kind of miss them a bit, or is it just my lost youth?