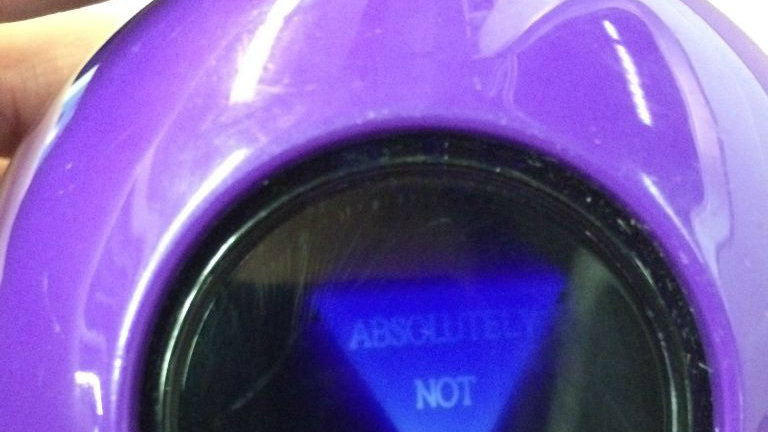 Magic Eight Ball: why do I keep you?

Magic Eight Ball why do I keep you?

Not quite the answer, I think. But it has been on a journey. It was given to me whilst I was a student in Nottingham about ten years ago I would guess. I can remember that for a while it was used from time to time. It was quite a popular thing back then though they’re not really much use. I think they were just new and it was a bit of fun when you were drunk. A few years later it came with me to Sheffield, where it was left in a cupboard.

When I moved again a couple of years later, this time to Manchester, I felt sorry for it. As I unpacked I determined to use it more so it went onto the bookcase in the living room at home. But I failed to use it. It just sat there, unable to answer anything, collecting dust along with the books. Then my partner moved in and he had one too. His was also a present and went immediately on his bookcase, which prompted me to do something more with mine.

Coincidentally I had just got a new office at work so now it lives there, still on a bookshelf, equally unused. I had hoped that putting it out on display at work would finally make me more likely to pick it up and ask it a question. Maybe to entertain a visitor or a student. So far, though, the only use it has had since I moved to Sheffield has been for this piece of research.

I don’t quite know why I keep it. I suppose because I think it was a gift and it still works. But I can’t recall who gave it to me and might be that I bought it for myself. I’ve put a post on Facebook to see if anyone can remember giving it to me but no luck so far. At least it has had a bit of use for this project and had its photo taken. Now it is going back on the shelf until I move offices no doubt. Perhaps then I’ll just pluck up the courage to throw it out, or maybe I’ll ‘accidentally’ leave it behind and someone else can inherit responsibility for it.

“Absolutely not,” it says. Honestly!