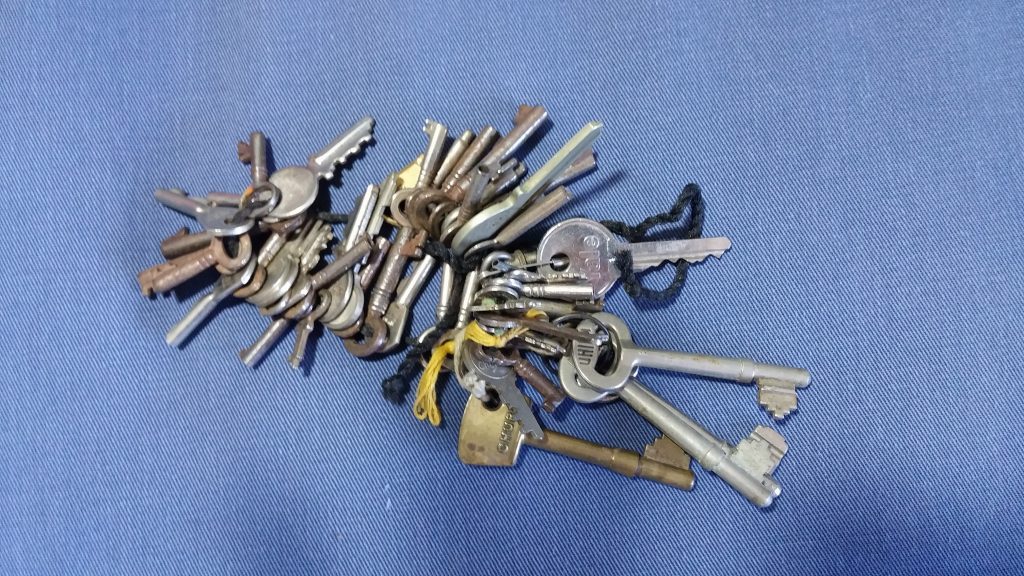 Hoard of unused keys in a dormant things stash

This is one of my dormant things stashes, on a bookshelf next to the sofa. I live in a rented modern flat, but I still cart a lot of stuff with me whenever I move. This stash is actually an aluminium herb planter, but doesn’t really work well as such, so it has been a stationery store and then a thing-thing for some while.

It has bits of foreign currency (some which are no longer usable, like Francs) business cards, birthday candles, pen refills and medals from running races (the ribbons at the back, most of which are less than a year old…).

At the front is the key collection I inherited from my grandfather who died in 1982. He was born in the 1890’s and was a keeper of things: bits of string, paperclips, keys and so-on. Not for reasons of poverty, as I don’t think he was ever needy. My mother kept a lot of his things when he died and I kept a lot of them when she died 20 years ago. I have periodically decluttered over the years getting rid of things that I honestly don’t need or have room for, but the key collection I have kept for some unknown reason. I am an only child (with no children) of an only child so you can draw your own conclusions!

I have added a few keys of my own (all for places I no longer live). The black nylon string is from my mother’s macrame phase in the 70s so there must be one of her keys in there too.

Looking at the photo you can also see that I still have some of my mother’s crockery which I hardly ever use, which is why it is on the bookcase!