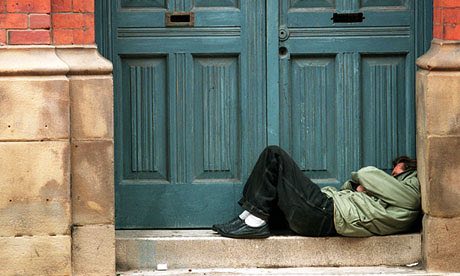 Conservatives, prioritising the economy and the resulting homeless crisis.

Editor Update: This article was selected as winner of our 2017 Blog Prize. Congratulations Lucy.

A Conservative government, which prioritises improvements to the economy over the country’s welfare provisions, has caused a staggering increase in homelessness. Homeless charity Crisis reports that after years of declining trends in homelessness prior to Tory rule, there has been a 50% increase since 2010, with the likelihood that it will rise further still as the impact of various reforms, the economic downturn and cuts to the housing benefit take effect. As a first-year student from a relatively wealthy and sheltered town, whilst I have always been aware of the presence of the homeless community, I was not prepared for the sheer number of people living on the streets that I would encounter when I moved up north. The huge homeless population here in Manchester is an accepted part of daily life. I want to explore how a combination of a prioritised focus on the economy and a neglect of welfare and housing has caused such devastating statistics.

The Tory government impresses upon us that a stronger economy means a wealthier and healthier public and that improvements to the economy will benefit everyone. During their time in government, however, this doesn’t appear to have become a reality for many. Take simply the fact that despite a growing economy of 2% per year and higher rates of employment, overall wages have not increased for the working man and woman as a consequence. The Conservatives place great emphasis on increases that have been made to the minimum wage in recent years. Yet they fail to acknowledge or legislate against the underhand tactics employed by unscrupulous employers to undercut fair pay and avoid other employer responsibilities and obligations, such as sick pay, national insurance contributions, and the new pension arrangements, namely by employing workers on zero-hours contracts, or by providing work on a ‘self-employed’ basis. This all suggests a flaw in our economy which discriminates against those that work for a living.

Economist Thomas Piketty highlighted that capitalism, the economic and political structure we use, tends to produce a rate in return on capital that is higher than the increase in income for workers.This means that those with existing wealth are getting richer through their investments, and are pulling away from those without wealth, from whose labour they benefit. This explains why we live in a society where the gap between rich and poor is ever-expanding, despite an improving economy. The public has been led to believe that more growth for the economy results in more growth for all, but the reality appears to be that a faster growth rate on capital within the economy actually just results in a faster growth in inequality, as some are elevated at the expense of others.

Wilkinson and Pickett found that inequality can be used as an explanation for a number of social ills. These range from mental illness and addictions, social mobility, children’s educational performance and more. It was identified that it is not wealth or lack of, that can lead to the prevalence of said social ills, but the existence and level of inequality in a country. They found that wealthier countries such as America and the UK experienced many of these issues to a higher degree than other, potentially poorer countries overall, simply because the level of inequality within these countries was far greater. Housing and homelessness charity Shelter cite how an individual becoming homeless is often the result of a complex interplay of personal circumstances and structural factors. Personal circumstances range from a lack of qualifications and support, poor physical and mental health, a history of abuse and addiction and many other factors. It appears that such social ills highlighted by Wilkinson and Pickett to be a result of inequality, are factors that contribute towards the likelihood of becoming homeless.

So in a country with growing stark inequality, is it any wonder that homelessness is on the rise?

We live in a culture where homelessness is attributed to personal circumstances and moral failures on behalf of the individual when rather its causes are primarily structural and centrally linked to the prevailing ideology of the free market, where housing is treated as a commodity rather than a right. The lack of affordable housing here in Britain has greatly contributed to the surge in homelessness along with an inability on the part of the government to build enough houses, especially social housing, to meet demand. With on-going restrictions on local councils to build new housing, cuts to the housing benefit and closure of long-stay psychiatric hospitals across the country indicate that the homeless issue isn’t set to change anytime soon. We need to ensure that a wider range of our society benefits from the fruits of our economic growth as inequality often produces inequality. We note that the number of homeless children has risen by 58% since the Tories came to power: surely such a poor start in life indicates a poor future.

The combination of an increasingly precarious working life, a shortage of affordable housing, cuts in housing benefit and other benefits, cuts in local authority funding and the current crisis experienced by health and social services is a lethal cocktail that is resulting in more and more people slipping through an increasingly weak and permeable safety net. This results in a building reliance on the work of charity groups that are overstretched and overwhelmed. Something must be done to tackle this rise in inequality and the resulting homelessness crisis.

Piketty, T. (2014). Capital in the Twenty-First Century. Harvard University Press.
Wilkinson, R. and Pickett, K. (2010) The spirit level: why equality is better for everyone. Penguin.

It’s 2018, what have we accomplished?
Does a good life have to cost the earth?
Is it time to protest the platform?