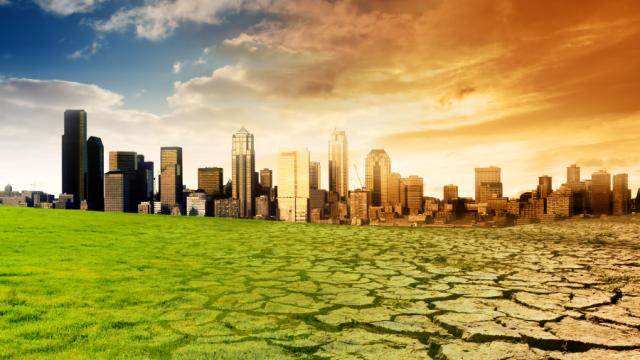 Is capitalism structurally bound to degrade the environment?

by Edgar Klusener | May 16, 2017 | Climate change and sustainable development | 0 comments

Arguments for and against climate change are less focused on whether or not it is a legitimate concern, but on the willingness to radically change our consumerist society in favour of helping the planet. Some argue that climate change is a natural occurrence, as the climate system is “highly nonlinear”, (Urry, 2009) and changes are typically “episodic and abrupt” (Urry, 2009) not gradual. However, “excess pleasure breed[s] exceptional excess of disaster,” and the current trajectory of human existence without change is unsustainable.

Admittedly, climate change does occur in natural cycles, however the present warming rate of our planet is unprecedented with an increase of almost 1.5°C since the 1880s unquestionably connected to human activity. Climate change is part of a wider ecological catastrophe with the Earth consisting of multiple interlocking systems and processes. In and of itself it acts as a risk multiplier, and, according to Urry, Capitalism as a “growth economy” cannot work with a finite environment. ‘Reflexive Modernity’ theories can be used to support scepticism to climate change through the idea that technological advances will allow for continued societal over-consumption, however, change to a certain extent is undoubtedly necessary. But is it a question of simply promoting the right kind of growth or changing our ways more radically?

Is the concept of collective responsibility too far-fetched in our consumerist society?

Our efforts in limiting climate change must be “anticipatory and preventative” (Giddens, 2009, chap. The Politics of Adaptation) where possible; we must adapt before catastrophic global warming, not adapt to its effects. However, in order to do this we must specify what the changes as a result of climate change will actually be – leading us into a territory of criticism and backlash from climate change sceptics, but more widely the dismissive hand of Neoliberalism. Giddens talks about our adaptive Capacity – “Capacity not only to cope in the face of external changes or shocks, but […] to respond actively and positively to them.” (Giddens, 2009) Acting before disaster is where the difficulty lies; because of the system of Capitalism and Neoliberal attitudes, it is difficult to motivate a collective desire for change in light of systemic individualism and over-consumption being so ingrained into the culture of the developed world.

Collective responsibility an issue as a result of political polarisation in regards to climate change. Third world countries will be affected first and hit the hardest, so without changing the basis of societal attitudes in regards to materialism, obsessive consumption and consumerism in a Neoliberal society, resulting in a collective effort to change the workings of the world, climate change will have catastrophic effects. This is currently difficult for some to accept due to our individualistic society.

Neoliberalist attitudes lead to dismissiveness toward climate change and its effects. It is debatable how catastrophic the effects will be, however Neoliberal/Capitalist inclinations lead to a contemptuous opinion on its effect on the current generation and in particular future generations. This is due to the desire for individual success on a personal but also on a structural level – in that “industrial and financial powers have been both deresponsibilized [from their effects on climate change] and handed extended powers to define social choices.” (Lohmann, 2016) Capitalist institutions are seemingly less willing to admit their effect on climate change as, to put it simply, climate change is a byproduct of a Neoliberal society.

Capitalism is not necessarily structurally bound as a system to degrade the environment if we change our consumption patterns, however as an ideological concept it is a major issue.
Climate change as a concept is “anti-American and anti-freedom,” (Lohmann, 2016) according to US politician Rand Paul. There is particular political polarisation and resistance to legitimacy of climate change in the United States due to the significance of Capitalism and the free market and basis of Neoliberalism. Neoliberalism both as an ideology and as a sociological/economic/political system is a perpetrator of climate change;
Individualism and individualistic attitudes prevent mutual understandings and conclusions in terms of climate change and how the human race as a whole should act in preventing ecological collapse. Individual efforts to change are insufficient and uncoordinated; simply outweighed by the systematic nature of the problem. A radical collective response is required (Schnaiberg, 1980) with governments implementing possibly unpopular regulations. The question is, how far can governments go in implementing these changes against the will of the people?

The global justice movement and the rise of veganism
We are not enough; how to make the powerful act on climate change?
The impact of climate change