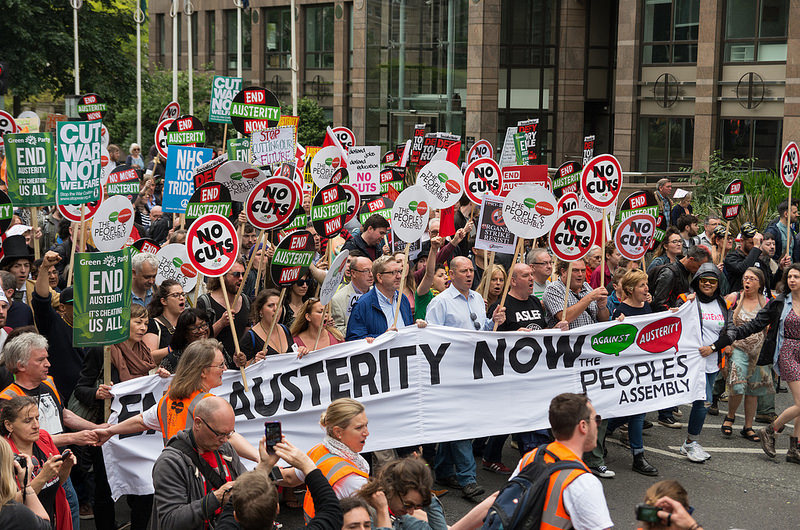 To what extent are anti-austerity protests worthwhile in the U.K?

Change can only happen when people come together from the ground up – R. Brand (2015)

According to the Oxford Dictionary, protests can be described as: ‘an organized public demonstration expressing strong objection to an official policy or course of action.’ One type of protest that occurs in Britain is anti-austerity rallies: where individuals display the detestation of austerity, a method used by the government to reduce the national deficit (debt). One reason for austerity is due to the ‘Financial Crisis’ that occurred from 2007-2008, which has been argued could be worse than the Great Depression. One approach to act against austerity are protests, according to activist and television personality Russell Brand, where uniting people together is the best way to convey collective messages. This blog will evaluate the methods used in anti-austerity protests, and investigate whether they are effective or not.

How did these circumstances come about? Oxfam (2013) wrote an extremely important case study explaining the crisis, suggesting that as the government bailed out the British banks from a £141bn worth of debt, the government decided spending cuts were the best way forward. As a result, Oxfam (2013) concluded that the poorest tenth of the population would suffer the most; with a 38% decline in their net income. Meanwhile, the richest tenth will only suffer a 5% decrease, Oxfam (2013). Oxfam (2013) also highlights the possible 900,000 jobs lost due to the public spending cuts from 2011-18. It is certainly apparent that the government have made decisions that some parts of society would disagree with- the working-class majority

One way the public have responded to such actions is to ‘come together’ as Brand (2015) stated, and make a stand. The People’s Assembly are an organisation that protest against austerity principles, such as, Education Allowance Maintenance cuts. Snowdon (2016) who wrote for the Huffington Post, declared that circa 50,000 protesters marched the streets of London aiming for such issues to be recognised, through The People’s Assembly. However, The People’s Assembly have not necessarily adopted a robust approach. Even though about 50,000 people have stood together in the march, protests of that size are only held annually. Griffiths (2016) recognises that broader social movements are vital in making a change, but it appears that such ruckus only forms once a year. Furthermore, The People’s Assembly (2017) do not have a part of their website dedicated to the success of the movement. Instead, it encourages individuals to volunteer in groups and donate. By the same token, anti-austerity protests are hardly publicized in the news, and sometimes when they are, they are portrayed in a negative light. Martin and Brown (2015) who wrote for the Daily Mail used the words ‘groups often have the sole aim of damaging property and injuring officers’ in the context of protests. Indeed, as the Daily Mail holds 45.3m readers Greenslade (2012), it is no surprise that some perceive anti-austerity protests as criminal and unlawful, as the message Martin and Brown (2015) may put across is that activism is dangerous and troubled. Still, Jeremy Corbyn, the current leader of the Labour party, when promoting the campaign said that: ‘austerity is a political choice, not an economic necessity’ Corbyn (2016), using campaigners as a source of reason. The People’s Assembly have proven to capture the attention of many, due to the turnouts of the protest, even though the media coverage is small. Yet, some coverage like the Daily Mail, portrays such activism as not worthwhile, even more so as ‘Hard-left thugs’ Martin and Brown (2015). Brand (2015) praises the idea of group unity, yet such newspapers like the Daily Mail take one incident of an ‘out of hand’ protest and amplify it to be an attack on society. Here, this shows that anti-austerity protests may have such a negative effect, rather than a worthwhile one.

Anti-austerity protests do not necessarily have, collectively, the same ideas. Due to the large scale of the protests, it is inevitable that some citizens may not protest with the same ideas. For example, Martin McGuinness, Northern Ireland’s first Minister supported the protests by saying that the government: ‘are the people who are given free rein to live out their Thatcherite fantasies at the expense of ordinary, decent communities throughout these islands’ (Gayle, 2015). Despite what McGuinness said may have been right, his opinion may ultimately be different to those that also support the rally. For example, the Socialist Worker also supported the protest by writing that there was: ‘an electric atmosphere’ before the protest started (the Socialist Worker, 2016). Clearly, the Socialist Worker party, who are often not taken seriously due to being far left, and McGuinness (2015) who was an Irish Republican, hold different political ideologies.

Therefore, if ever different parties who support anti-austerity measures hold meetings and coalitions, they may not agree completely. Indeed, due to different parties supporting the protests it may disenchant the public to wanting to support a massive protest, if there are political parties or activists that have different backgrounds, it may appear as off-putting. Therefore, there is no collective reasoning. Henceforth, Brand (2015) is correct to some extent that people ‘coming together’ may raise awareness of issues to provoke the matter. However, the practicality of having different political parties working together may be difficult to reach one universal agreement.

To conclude, Brand (2015) does suggest a valuable idea that when people come together to reinforce an important message, by using protests, it does raise awareness and the public takes an interest. Thus, whilst evaluating this matter there are two important obstacles that must change. Firstly, there has not been any direct cut to austerity since the protests, therefore it seems that the government ignore social movements like the People’s Assembly. Secondly, due to austerity being such a broad impact on most citizens of society, it is difficult to try to achieve a collective decision to change the method of dealing with debt with alternatives. Protests may not always achieve the desired outcome for people, because the government may show a lack of interest for the public’s opinion. Freedom to act upon such matters are important, otherwise, change may never occur.

Climate change, capitalism and Donald Trump.
Loneliness and social isolation in ageing populations
Is it all black and white? Radicalisation and terrorism in the modern day