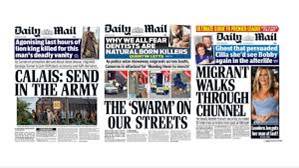 Since 2015, the national media has been saturated with coverage of “the migrant crisis”. This coverage has been based solely on asylum seekers, and has been accompanied by various pictures of boats filled with people travelling across the Mediterranean Sea. This narrow focus raises the question of why only one specific type of migrant is supposedly involved in this “crisis”, and how it became known as such. This blog post will address this question, along with underlying issues of race, and the political climate that allowed an influx of asylum seekers to become thought of as a crisis for the British (rather than those being forced to flee their homes in search of safety).

Narratives surrounding the migrant crisis have been almost entirely negative, plainly illustrated by the term ‘crisis’ being deployed to describe the situation. Furthermore, national headlines have described asylum seekers as “floods” and “tidal waves”, effectively exaggerating the issue and dehumanizing the people they are talking about. These narratives are emphasised and legitimized by political figures, such the comment made by former foreign secretary Philip Hammond about asylum seekers “marauding”. Even the prime minister at the time was quick to describe these people as “swarms”, which swiftly removed them of their humanity in the eyes of the British public, and painted a negative picture of them as a threat to the nation. What is striking, is that this language is exclusively applied to non-white, and particularly Muslim asylum seekers, rather than all migrants. This is despite most illegal immigrants (whom most would argue are more of a problem than asylum seekers fleeing persecution) actually being from countries such as Australia, having arrived on a visa and overstayed. Furthermore, the idea of the UK having a migrant crisis at all is dramatized, as the majority of migrants forced from their homes actually found shelter in much poorer countries, who lack the resources to house them (unlike the UK). These factors make it clear that “the migrant crisis” is a socially constructed reality. But why the focus on asylum seekers, and not other migrants?

The answer to this, is that the issue of the migrant crisis is racialized. Representations of the situation include only a certain type of migrant crossing the border in a very specific way, resulting in the demonization of this group of people – namely, Muslims. This racism from mainstream media outlets and even mainstream political parties is made acceptable due to the shift to cultural racism, whereby the focus becomes cultural differences rather than biological or physical differences such as skin colour. This allows racism to be denied (Gale, 2004). With cultural racism, the debate is centred around issues of sovereignty and how some cultures (more than others) pose a threat to the nation. Despite these ideas stemming from underlying racism, they are widely accepted by the public due to the emphasis on culture, rather than overtly racist arguments. Through this, the migrant crisis can be framed as an issue purely involving non-white migrants, particularly asylum seekers. The demonization of these people and their culture also allows the issue to be framed as negative mostly for Britain, taking the focus away from the context of the crisis – the suffering these people are experiencing and the reasons they are attempting to come to the UK in the first place. The reasons asylum seekers have for fleeing their home countries are pushed even further away from the public eye through the constant paranoia in media and political discourses about ‘bogus asylum seekers’, increasing the public’s mistrust of the racialized ‘other’. This forces many to believe that any asylum seeker could be ‘faking’, leading to suspicion of any and all individuals as plainly economic migrants or more sinisterly as criminals and terrorists. Cultural racism allows these ideas to be spread freely throughout the country via the media, intensifying the threat of the migrant crisis.

Cultural racism is steeped in the idea that some cultures pose a threat to Britain as a nation. This reflects the increased anxiety about Islam present in Europe, evident from the increased anti-Muslim hate crimes, which are said to have grown by 200% since 2015 (when the migrant crisis began). This Islamophobia has been fortified by the rise of right wing parties globally, who are often anti-Islam and anti-multiculturalist. This is evident in the UK through the growing support for parties such as UKIP, and the establishment of new right-wing parties such as Liberty GB, who preach cutting the funding for any foreign cultural centres or festivals, and the eradication of Islam. Although more extreme, the essence of some of these views are seen even within mainstream political parties, as public funding for language schools around the country continues to be cut, making it harder for asylum seekers to find work and therefore remain and survive in this country. Through policy such as this, it is evident how socially constructed stereotypes of some cultures (those more different to British culture) have real effects on real people.

It is evident that the supposed migrant crisis affecting Europe is no more than a socially constructed reality which has the effect of creating a cultural ‘enemy’, and fuelling racial tensions between nations. The specificity of the migrants which are deemed a problem is blatant evidence of how media discourses can exacerbate politics of fear (Gale, 2004), along with the continuous suspicion and demonization of non-white immigrants and asylum seekers. The issue of the migrant crisis may be framed as one of sovereignty; however, it remains clear that race is the underlying issue at hand.

To what extent are anti-austerity protests worthwhile in the U.K?
What can be done about climate change in the 21st century?
Mobility is a power and a privilege which the global north abuses