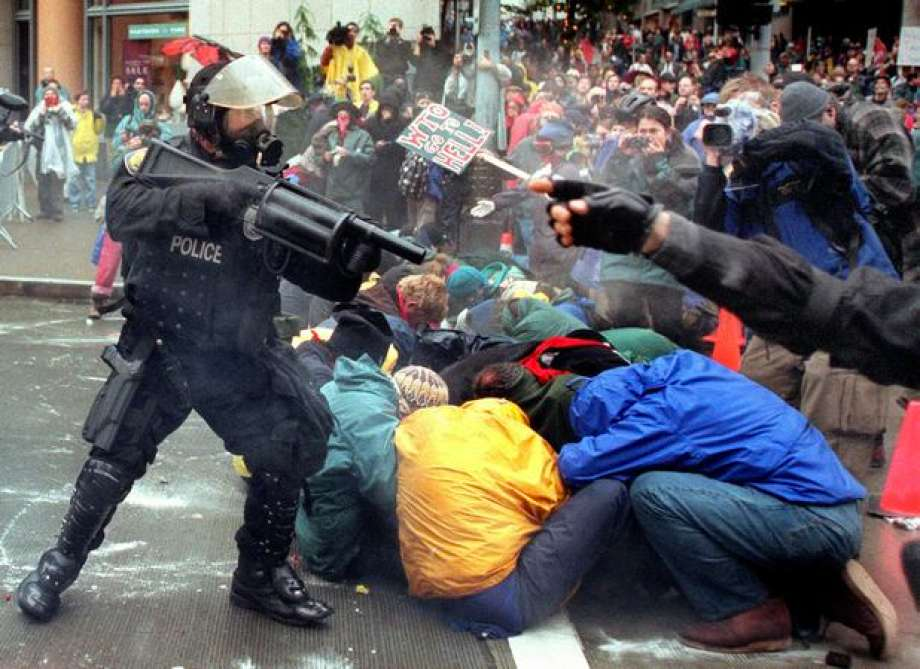 Globally, there are many different challenges that effect the world both socially and physically, ranging from global climate change to global financial crisis and economic inequality. In this post, I will be focusing on how the current model of globalisation has become a major global social challenge and how different groups of people from around the world are fighting the power that thrives on it. As the site Economics Online states, “Globalisation refers to the integration of markets in the global economy, leading to the increased interconnectedness of national economies” . Markets where globalisation is particularly common include financial markets, money and insurance markets, commodity markets, including markets for oil and coffee, and product/consumer markets.

As a result of this growth of globalisation and the drastic effect it has had on the world physically, economically and socially, a loose knit network of individuals and groups across the world have connected together to protest globalisation under the Global Justice Movement (GJM). Originating in the 1990s, the GJM is a very diverse movement that doesn’t have just one cause or one ideology but rather they fight for an alternative form of globalisation. The majority of the movement doesn’t necessarily view globalisation as being a bad thing; they are simply against the current neo-Liberal model of organisation and fight for a more democratic form. The Spanish sociologist Manuel Castells (2004) argues that the GJM can be understood as resisting neo-Liberalism by providing alternatives to the logic of global order. In a volume called We Are Everywhere: The irresistible rise of global anticapitalism, protestors who are involved in GJM said themselves that the reason why their “protests have erupted on continent after continent” is because globally they are “fuelled by extremes of wealth and poverty, by military repression, by environmental breakdown, by ever-diminishing power to control our own lives and resources.”

As I have mentioned, the movement originated in the 1990s, more specifically in 1994 in the global south with the Zapatista Struggle. The Zapatistas were, and still are, indigenous people from the Chiapas region in Mexico who rebelled against the North American Free Trade Agreement as their lives and habitat were being drastically impacted by this export of neo-Liberalism. This Free Trade Agreement was negatively affecting a number of different aspects of the Zapatistas’ lives, causing environmental damage and pollution, and it was also disrupting their collective way of living and owning land. Through the adoption of guerrilla-like tactics, the Zapatistas rose up against the idea of private owning of land for factories and the cutting down of trees. These indigenous people led an armed struggle and as a protest against neo-Liberalism they took over small Mexican villages and ran them a lot more democratically. The Zapatistas put out a call to social movements across the world to unite against neo-Liberalism; they held political meetings for activists from around the world and through this they formed transnational activist networks. Their struggle formed a global activist network via the internet, and by 1999 the Western media picked up the Zapatistas’ struggle and the Global Justice Movement hit worldwide news after the ground breaking Battle of Seattle.

The Battle of Seattle is another example of a network of individuals coming together to protest neo-Liberal globalisation; this time peaceful protestors in the city successfully managed to shut down the World Trade Organisation conference in Seattle. Over the course of the protest, peaceful demonstrations targeted governments, corporations and international political and economic institutions and their summits. Within this movement there was a hard emphasis on democracy as the people wanted to open up space for debate and discussion within government. Like the Zapatista Struggle, the protesters involved in the Battle of Seattle used the internet and social forums to not only attack the neo-Liberal power but form a global network to debate issues democratically and give voices to those excluded and overlooked.

Within the Global Justice Movement, a wide range of media and culture based tactics are used throughout the networks to fight against neo-Liberal capitalism. The movements use the very same channels that the neo-Liberal power operates through to criticise it; internet, media and social media platforms. This is what Castells calls “counter power”. An example of a movement that was “born digital” is the 2011 Occupy movement; an international socio-political movement against social inequality and lack of “real democracy” around the world. This hybrid network movement that began on Wall Street and soon spread to London involved a wave of global protests to initiate global change against neo-Liberal capitalism. Castells argues that thanks to the internet and social media this movement was able to take off transnationally and allowed for attempts at “real democracy”.

Overall it is evident that the current form of neo-Liberal globalisation has become a strong vocal point for change amongst protestors across the world, with Castells arguing that exploitation is interconnected in neo-liberal policies. According to the Spanish sociologist, “people all over the world resent the loss of control over their lives, over the environment, over their jobs, over their economies, over their governments, over their countries, and ultimately, over the fate of the Earth” (Castells, 2004), making it only natural for resistance and challenge from the people against the power that benefits from and controls the new global order.