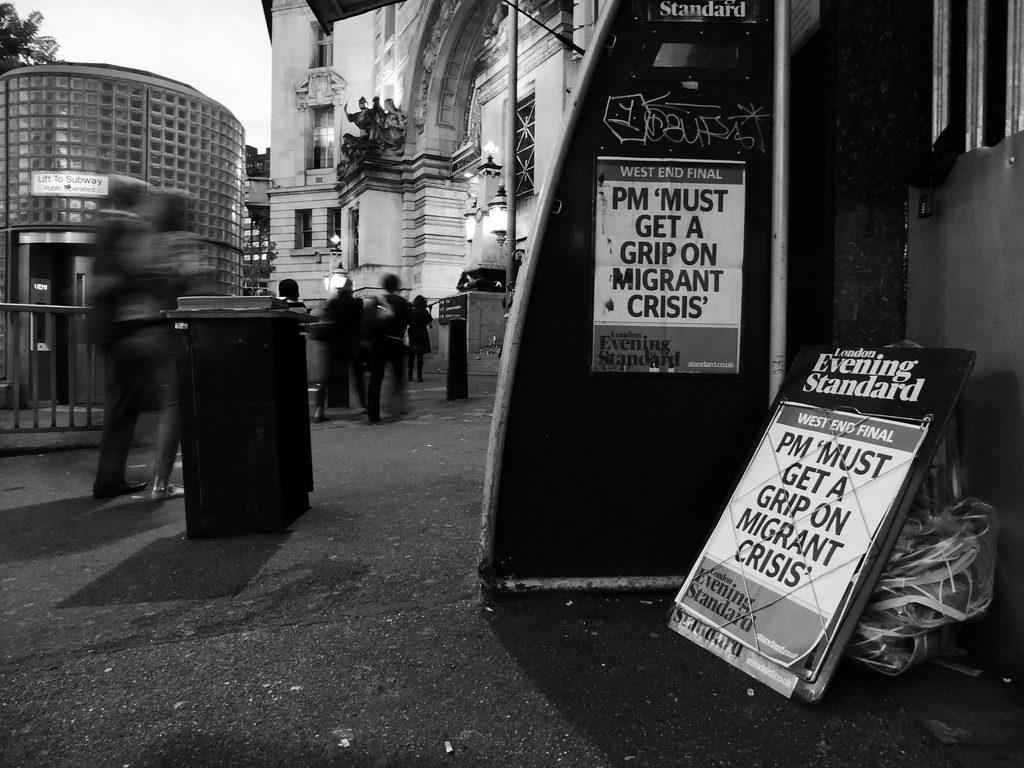 Race and the migrant crisis – a question of protection or rejection?

Throughout time migration has been a common phenomenon, for many reasons.  However, in 2015, the world saw reports of thousands of refugees and migrants fleeing their country of origin. This influx of movement was met with masses of media attention, as well as political opinion and economic strain. In this blog, I intend to explore the true facts and figures of this sociological phenomenon which has involved issues of mass movement, media attention, political opinion and economic strain.  The aim of my research is to understand whether the measures taken by governments are movements of protection or acts of rejection, breeding racism and prejudice.

The International Organization for Migration defines a migrant as “any person who is moving or has moved across an international border or within a state away from his/her habitual place of residence”. They also explain that being a migrant is not affected by “(1) the person’s legal status; (2) whether the movement is voluntary or involuntary; (3) what causes for the movement are; or (4) what the length of the stay is”. In addition to this definition, data in the table below shows that the top reasons for migration to the UK in 2015 were formal study and to start a definite job (rather than looking for work). 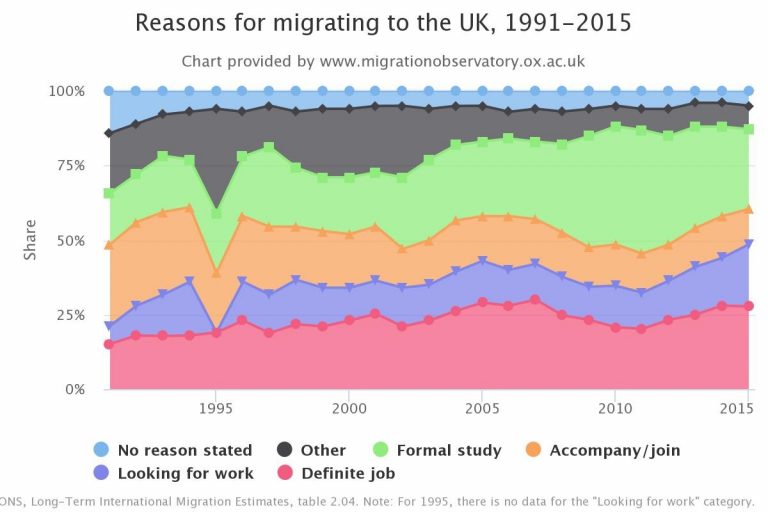 It seems though, that these are not the only reasons. In the news, there is a great focus on the many refugees that are fleeing unstable countries stricken by war. BBC News explained that Syrians and Afghans “make up the two largest groups in mass displacement of people across Europe and beyond”

On 4th April 2017, a chemical attack was carried out in the town of Khan Sheikhoun. This horrific attack killed at least 70 civilians and left more than 100 requiring medical attention. Khan Sheikhoun is a known rebel-held area, and so there is speculation that the Syrian Government were responsible for the attack. This is one of the most recent (of many) tragedies in Syria, that demonstrate the instability that Syrian refugees seek to flee.

Despite these attacks on innocent civilians, migrants and refugees have been depicted in a negative light. In the media, David Cameron is quoted to describe migrants as a “swarm”, and in political discourse, Nigel Farage also likened migrants to insects in his Brexit campaign, “parasites, undermining their host countries”. We also see many people associating migration with causing low paid jobs, low wages and people being forced out of work completely. Due to these depictions, it seems many lose sympathy for the horrific circumstances many have fled, and as a result, dehumanize and shun the individuals looking for asylum in the EU.

If we look at race as a social construct, we can see a huge impact in our decisions towards migrants. We often express differences in binaries, seeking to put a division between ‘them’ versus ‘us’. Gale explains that “racism places an emphasis on the presence of those seen as aliens and how this presence is assumed to be a threat to the nation and national identity” (“National Anti-Racism Partnership and Strategy: Submission”, Gale, P). When we portray ourselves as one ‘team’ and migrants as another ‘team’, it makes it easier for us to fight arrivals and protect what we know and understand.

Some of the media, and various politicians, also argue for a link between migration and terrorism. In fact, Hungarian politician and economist, Antal Rogan, believed that the 2016 terrorist attacks in Paris occurred because “illegal immigration and terrorism go hand in hand”, and it was “quite clear” the “terrorist perpetrators” of recent attacks including those in Paris were “illegal immigrants”. Another politician who has been particularly vocal on the topic of immigrants is Donald Trump, who, on Omar Mateen’s killing of 49 people at a gay nightclub in Orlando, was reported saying; “the only reason the killer was in America in the first place is because we allowed his family to come here”. On the Paris attacks, Trump stood by a discredited claim that “thousands” of U.S. Muslims cheered on the ISIS attacks, and as a result, “he would support some sort of registry of Muslims in the U.S.”. So, is there any truth in these statements, considering people with such great power are reported to stand by them? 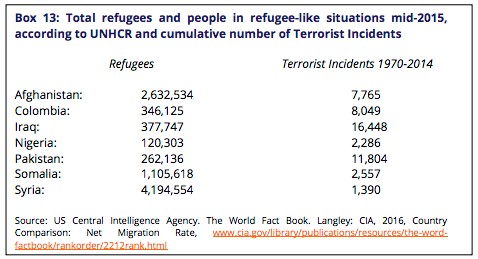 (Number of refugees compared with terrorist incidents from 1970-2015. Source: ‘Links between terrorism and migration: an exploration’ Alex P. Schmid, 2016, page 32)

His paper also indicates that when the children of immigrants are not integrated into society, there is a feeling of struggle between the two cultures. This struggle can lead to a search for identity, in which the individual may turn to Jihadists as role models, and become foreign fighters. Schmid’s research demonstrates the effect that terrorism has on migrants, rather than the myths that political leaders such as Antal Rogan and Donald Trump are feeding to the public. 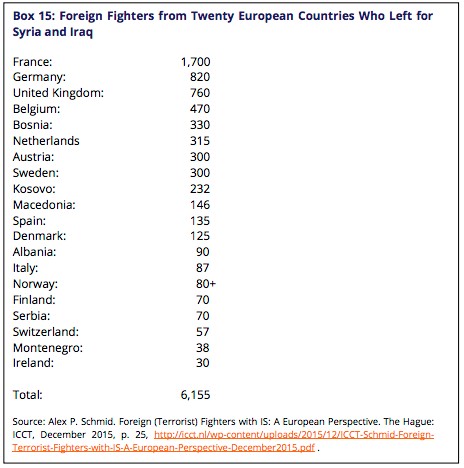 Ben Emmerson, Special Rapporteur on counter-terrorism and human rights delivered a report to the United Nation General Assembly, reiterating these findings, stating that “while there is no evidence that migration leads to increased terrorist activity, migration policies that are restrictive or that violate human rights may, in fact, create conditions conducive to terrorism.”

However, although there isn’t proof in many claims made about migrants, there is truth in the economical strain that the migrant crisis brings. In 2015, an estimated 1.2 million asylum applications were recorded in the EU. As host countries have to pay to process applicants, as well as provide food, housing, health and education, a lot of money has gone into the effects of the migrant crisis. In particular, countries such as Greece and Sweden are feeling the strain, and as a result, “the EU has unveiled an unprecedented emergency plan, worth 700 million euros to help Greece and other countries cope with the migration crisis”.

The movement of refugees from warring countries to the EU seems to be a phenomenon that has affected the majority of the world’s population in one way or another, however it seems that the real crisis is the effect that it has had on our tolerance and acceptance of others. The crisis has legitimised racism and prejudices through myths fed to the public, which in fact has created a devastating humanitarian crisis.

Schmid, A.P. “Links between Terrorism and Migration: an Exploration” The International Centre for Counter-Terrorism – The Hague 7, no. 4 (2016).
Gale, P. “National Anti-Racism Partnership and Strategy: Submission”, “Racism. It stops with me”, The Australian Human Rights Commission, 2012.

The Faily Express: Media discourse on migrants
Mobility is a power and a privilege which the global north abuses
British Border Patrol: The Capitalist Edition