Capitalism is the main driver of climate change without a doubt. Excess consumerism and overproduction have resulted in many benefits whilst damaging the environment to irreversible lengths. The equilibrium of the relationship between nature and society has been tipped by the development of capitalism. To restore the balance, significant economic and political policies must be developed to ensure a social shift towards a more sustainable way of living. This blog post will discuss the relationship between capitalism and climate change and offers some resolutions to the preservation of the environment. 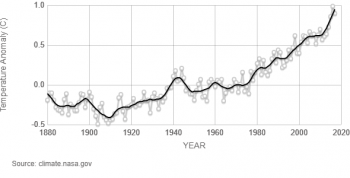 The graph demonstrates the major role that the global temperature plays on the mechanisms of the environment. Its increase is causing more natural disasters, the melting of ice caps and many animals are struggling to re-acclimatize. These consequences of climate change are becoming more dangerous as the growing rise in temperature will continue to negatively affect the environment. This environmental issue became a political and economic focus in the late twentieth century with the publication of the Brundtland Report and the Kyoto Protocol, which established a global framework for carbon markets. Although this suggests that capitalist societies from the Global North are aware of the consequences of their economic activity, the fact that there have been little innovations put into place to reduce climate change implies they are ignoring its severity. This suggests that <pdespite the warnings regarding the climate and the devastation that could happen, the aims of these reports have not been recognised correctly or achieved.

The Global North has more potential to reduce climate change as they have the knowledge and human capacity to create effective policy changes. Martina Dorigo1 suggests that developed countries must develop and apply macroeconomics, redress the social logic of consumerism to reteach society the difference between desire and need, and establish environmental limits on economic activity to monitor the production of greenhouse gases. The proposed development of a pan-European integrated energy market must be monitored for progress and compliance for both companies and society, demonstrating the need for a social shift. Moreover, Dorigo argues that China would set an example for the rest of world, especially the Middle East and Central Asia, which are huge capitalist engines that have a major influence over the global market.

Satyabrata Mishra suggests the reluctance of major developed countries is a result of the ‘there is no alternative’ syndrome2. Some countries, such as China, could face political and social instability because of a non-sustainable social regime. Perhaps this uncertainty fuels their reluctance to accept their potential of the significant social changes needed, regardless of having the power to achieve them. Despite the immediate economic investments and social changes necessary to reduce this issue, the long-term benefits should be enough to gain support and commitment to the proposed changes. Governments do not wish to take responsibility as the immediate costs are expensive and therefore unpopular with the electorate.

Poorer, less developed countries could build a new society based on democracy, egalitarianism and ecological sustainability compared to the changes needed from the Global North. However, this is a reductionist approach as the Global South are interconnected dimensions of dependency; they are subordinate to core industrialised nations because of their reliance on exports and their position in the international division of labour3. The relationship between countries also plays a major role on the achievement of climate change. Due to the highly competitive nature of capitalism, powerful countries are unlikely to undertake the necessary changes as it could potentially damage their international status and influence, as well as their economic, political and societal stability.

Nonetheless, it surely is a better option than to continue the gruelling capitalist economy of the exploitation of a large, cheap labour force, and of course, the reckless exploitation of natural resources and space. Ultimately, if capitalism continues in this path, the natural disasters and wars will transpire, thus collapsing capitalism completely.

To conclude, it has been made very clear that although the most powerful nations must take the lead to make the significant economic and political changes to reduce climate change, the poorer countries and domestic societies must commit to the social shift proposed. This will ensure, over time, the restoration of the relationship between society and nature and reduce the level of greenhouse gasses in the atmosphere and the preservation of the global environment.

Does a good life have to cost the earth?
Why women as environmental activists will bring about necessary political change for a sustainable f...
Corporate Social Responsibility and Outsourcing Blame to the Consumer