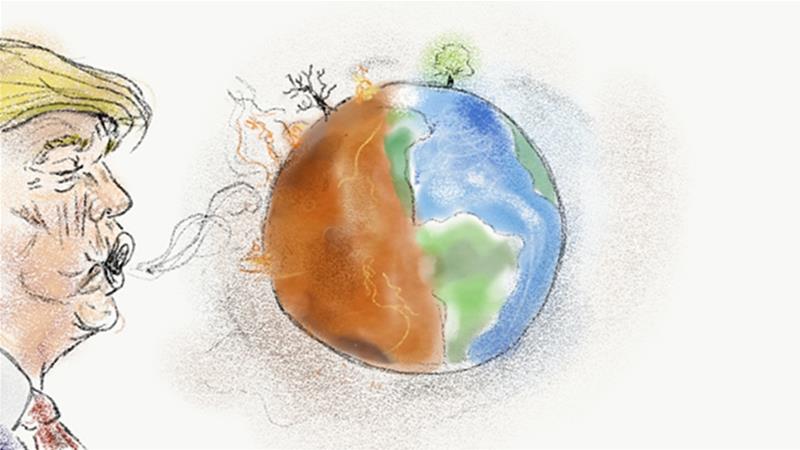 The climate is changing, and we know it. Our planet is warming, and the icecaps are melting; the increase of greenhouse gases is having slow, yet catastrophic consequences on our earth’s delicate and interconnected ecosystem. Man-made climate change has increased with the growth of capitalist societies. Businesses are growing, they are making more profits and reinvesting them, the bourgeoisie are growing richer, and the environment is becoming more and more damaged by the manufacturing of products and the emission of greenhouse gases. We hear about these events frequently; through social media and through some of our favourite celebrities (either highlighting its severity like Leonardo DiCaprio, or claiming its falseness, like Trump). So, with all this awareness, what is actually being done about the situation? 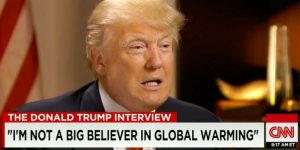 The president does not believe in climate change

Global temperatures have risen by at least 0.74 C over the last century due to the higher levels of greenhouse gases in the earth’s atmosphere, which trap the sun’s rays and warm up the earth (Urry 2010). The rising of the earth’s temperature is now undeniable – yet still denied by the most powerful man in the world. Trump believes he has a ‘bigger button’ than Kim Jong Un, however does not believe that his country is contributing to the slow yet catastrophic destruction of the earth’s ecosystem! America has been the victim of a series of climate-related natural disasters since Trump’s election in 2016, hence you’d think it would be a big media target, ‘yet the total combined coverage for the entire year [on climate change] on the evening and Sunday news programmes on BC, CBS, NBC and Fox News amounted to 50 minutes’ (Monbiot, 2017). I still struggle to comprehend how one of the most defining issues of the 21st Century can be tried to be erased from the minds of Americans, not to mention how the threat of global warming has been removed from the National Security Strategy by Trump, after it was added by Obama in 2015 (Kestler-D’Amours 2018). 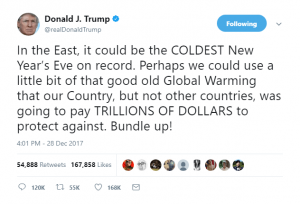 Climate change may not be the biggest threat to our safety at this point in time, but it definitely is an issue which needs to be addressed. Trump has essentially undone many of the anti-global warming policies which were put in place before his presidency; he has made global warming seem non-existent to the people of his country and I believe there are reasons behind this. Trump is a self-proclaimed ‘successful’ businessman. He has made millions through the exploitation of people less fortunate than him, he has made massive profits from other people’s hard labour and only paid them small wages, he is essentially the master of capitalism. To accept that the growth of businesses is contributing to climate change is to essentially go against what he has built his life and career around, so Trump has decided to ignore the issue altogether. He has taken the approach that if he doesn’t experience warmth first-hand, then global warming must be a conspiracy! It is surprising that the most powerful man in the world cannot comprehend that the warming of the earth has played a part in the natural disasters his country experiences, such as hurricane Harvey (September 2017) and the California wildfires (December 2017) just to name two in the past 6 months. No weather event can be blamed fully on human-driven climate change, but no weather event is unaffected by it (Monbiot, 2017), and doing nothing about the current situation of climate change is going to have catastrophic consequences on future generations.

The president needs to understand that man-made global warming is partially his responsibility to deal with. The ecosystem and our society are more interlinked than he realises, and the sooner he realises that our species is slowly destroying our planet, the sooner something can be done about it.

Does a good life have to cost the earth?
Ecofeminism: biodegradable trash or revolutionary theory?
Is the large-scale promotion of electric cars a solution to ease the climate change?