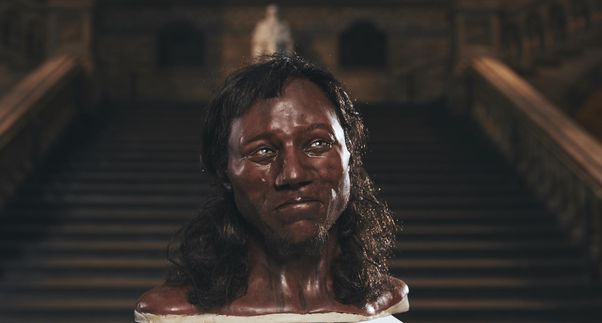 You may have seen in the news recently that a certain skeleton known as ‘Cheddar Man’ has received newfound attention in discussions about British and racial identity. Despite his discovery in Cheddar Gorge, Somerset, some 115 years ago, it is only now that the Natural History Museum has managed to use his 10,000-year-old DNA for facial reconstruction: blue eyes, dark or dark-to-black skin and dark hair.

This has given us a fascinating insight into what one of our oldest British ancestors most probably looked like, giving Britons 10% of their genes. And it’s not what most people may have expected. Cheddar Man’s appearance is in direct contrast to the mostly white, fair-haired Britain we know today. Or, rather, is in direct contrast to our ideas about what a native Briton should look like.

From beyond the grave, Cheddar Man is definitely giving some side-eye to the idea that British natives are white, and that’s the end of the story. Indeed, a white complexion was how The University of Manchester’s earlier reconstruction came out.

“The historical perspective that you get [from reconstructing Cheddar Man] just tells you that things change, things are in flux, and what may seem as a cemented truth: that people that feel British should have white skin, through time [it’s] not at all an immutable truth – it has always changed, and it will change”

In this way, Cheddar Man has breathed new life into discrediting the idea that being British is a definable biological trait with clear origins (in whiteness). Our pre-conceived ideas about native British whiteness are seemingly ill-founded when we consider his DNA. Both whiteness and any associated Britishness have in fact been developed after a very complex entanglement of genetics and historical migration. So why is immigration such a racially charged issue today?

Around Cheddar Man’s time, human populations are thought to have migrated over a land-bridge called ‘Doggerland’. This used to connect Britain to Europe but has since been blockaded by a wall of water. Fortunately, we didn’t have to make Europe pay for it back then. Today, who knows what will happen, but it is not only racism towards dark-skinned immigrants that we should worry about.

Racism has a lesser known brother: racialisation. This is something that has received little attention in the reports on Cheddar Man.
Sociologists study ‘racialisation’, particularly for new migrations (Eastern Europeans into Britain, rather than Cheddar Man and older populations crossing over ‘Doggerland’). It is a metamorphosis of “colour-coded racism” (Erel et al, 2016: 1348), that much of the Cheddar Man coverage revolved around. It includes forms like “xeno-racism”, which single out migrants even if they are also white (ibid). In fact, Fox et al. (2012) explain that shared whiteness does little to better the chances of immigrants feeling welcomed into Britain today – they are still construed as ‘others’.

In this way, racialisation is more of a process than a belief (unlike racism): migrants of any kind can be grouped together and portrayed as inferior based on their “cultural, social, and/or quasi-biological traits” (Fox et al., 2012:689). Cheddar Man’s dark skin colour would not be the only thing that would have defined him had he migrated to or lived in Britain today. Perhaps he would have also been criticised for not sharing in old cannibalistic British values.

Whilst it is incredible to see this ancient ancestor brought back into being, the revelation that he was dark-skinned does little for our immigration debates, even when dark-skinned migrants are involved. We should beware that racialisation can find another way to promote exclusion in society, such as via accusations of entrenched criminality or culturally-acquired laziness in certain migrant groups.

Members of British society can continue to exercise power over the ‘Other’, immigrant or inferior groups, they need only define what this new group looks and behaves like to racialize them. As Gale (2004) shows, race as we know it is not only a social construct, but it’s reinforced by the media and politics surrounding immigration.

It seems we no longer need just skin colour to identify each other as different, or ‘other’. Still, Cheddar Man seems unphased, he even has a mysterious Mona Lisa smile. Perhaps he knows he will annoy a few white supremacists, even if he doesn’t expunge racism and racialisation just yet.

Migration and the war on race
Migration: Benefit or burden?
We need to change the way we talk about radicalisation