Ever since the 9/11 attacks, the words ‘terrorism’ and ‘radical’ have been used more frequently by both scholars and the media. Due to these attacks being associated with Muslim extremists, nowadays some people talk about terrorism and Islam interchangeably which of course is completely incorrect and ignorant. This idea is then both intentionally and unintentionally perpetuated in media and government policy. However, I believe that it is clear that if we wish to tackle radicalisation and extremist behaviour, we have to cover all potential threats instead of targeting one group.

After 2001, radicalisation has been a growing concern amongst communities and governments, each one striving to define radical behaviour for their policy. However, it is impossible to ignore the agendas that come with each different definition. These can be things such as if there is a direct or indirect threat to citizens, relations with foreign governments and individuals own varying political aims. According to Sedgwick (2010), some common agreements among different country’s definitions of radical and their anti-terrorism policy is that radical is not the same as terrorist but radical normally does mean a threat. There is also a strong link within them between radical and violence, for example in the US definition violence is a very central element but other countries like the Netherlands reference both violent and non-violent radical behaviour.

As well as trying to form their own definition of radicalisation, countries have made an attempt to profile what ‘a radical looks like’ and who is vulnerable to become one themselves. This focuses wrongly on the individual and things that correlate with terrorist behaviour, rather than root causes. Furthermore, it has created ‘suspect communities’ (Kundnani 2012) i.e. the Muslim population. If we look at the UK’s counter-terrorism scheme, for example, the Guardian reported that in 2016 the scheme referred almost 4,000 people which was triple the figure in 2015. These included children aged 9 and under, as well as there being a definite focus on those who were Muslim. For example, out of the 788 referrals from the West Midland region, there were 293 individuals who identified as Muslim. Of course, governments have to keep in mind all possible threats, which includes those from Muslim extremist groups, but the fact they have such a focus on them seems to confirm in people’s mind that they are the only radical threat. 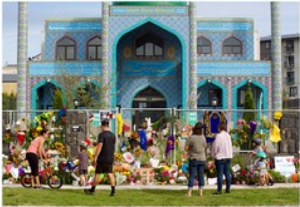 Auckland families pay their respect outside a mosque in New Lynn. Image by Chris Hall on Flickr

Across history, there have been incidences of white supremacist radical behaviour. If you want to look at something on a large scale then look no further than Nazi Germany for example. However, many people seem to think this behaviour was abandoned in 1945 and that any indication of it happening still is rare or happens in other places but “not here”. But it’s been happening all over the world even recently. We were all shaken by the horrific events in New Zealand in which 49 innocent people were killed at Al Noor mosque and Linwood Islamic centre. This was, of course, an atrocious act committed against Muslims who were simply attending Friday prayer and was notably committed by a young white Australian who is believed to be, unsurprisingly, a white supremacist. Thankfully, this event unlike previous in other parts of the world has been labelled by New Zealand’s PM Jacinda Ardern as a terrorist attack. This shouldn’t be seen as a big deal, but it seems that governments and media are sometimes reluctant to label an attack which is committed by a white person as an act of terror. This can be seen from previous attacks such as the Pittsburgh shooting at a Jewish synagogue in the US in 2018 in which 11 people were killed. This is an example of a white supremacist attack demonstrates that a lot of ethnicities and religions are at risk from these kinds of individuals but also is an example of the reluctance for it to be labelled as a terrorist attack. Although of course it was described as antisemitic and evil, America’s own leader President Trump even failed to outright say terrorist attack.

However, the attacks in New Zealand have shocked a lot of people into finally realising the threat that white supremacist terrorists hold especially as this occurred so randomly in a peaceful country. And what’s more, the floods of support for the Muslim community has been incredible. We must remember though that radical white supremacist behaviour has been present within our global society for years and others will continue to be radicalised too unless both the government and the media treat it in the same manner as other forms of radical behaviour.

Migrant or refugee - does the label even matter?
Are they radicals?
Grenfell: The repercussions of racial capitalism through gentrification