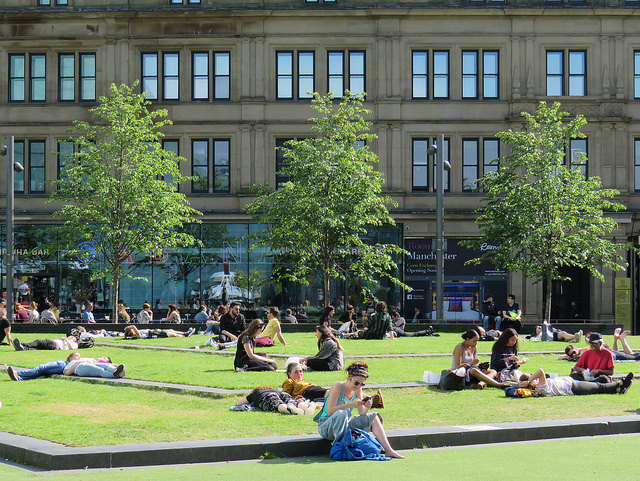 Heatwave in February: Why should you care?

by Edgar Klusener | May 30, 2019 | Climate change and sustainable development | 0 comments

Image: by paul62_2017 on Flickr. Mancunians enjoying the sun.

Heatwave in February: Why should you care?

You might have noticed drastic changes in the weather across the UK, but did you suspect that these extremes are caused by climate change and human-induced impact?

Despite that the UK population experienced snow and freezing temperatures at the beginning of February, unusually warm weather was recorded in the final days of the month, and the remarkably high temperatures reached record numbers of 21.2 °C in Kew Gardens, London (MET summary). While these stark changes in the weather may be a source of enjoyment, the dramatic fluctuations in temperatures indicate alarming disruptions in the climate, which is why I want to underline these changes as one of the most urgent global challenges, effects and consequences of which are often neglected.

There is a consensus among scientists that anthropogenic (human-induced) impact on the environment, mainly the rising levels of greenhouse gas emissions, contributed to certain extremes in the weather, such as heatwaves. Multiple geoscientific studies (American Meteorological Society) reaffirm the claims made by the Intergovernmental Panel on Climate Change (IPCC, 2014) that human influence is the main driver of the global scale changes observable in the occurrence and intensity of daily temperature extremes since the 1950’s.

The tremendous human-induced influences on the environment extend far beyond the public expectations. British residents appear “relatively relaxed about climate change”, as indicated by the annual British Social Attitudes Survey (2018: 23), those surveyed acknowledged a human component, but only to some extent and overall remained “indifferent and apathetic about climate change (Barasi, 2017)” and its far-reaching consequences.

However, changes in ecosystems and the climate are detectable, physical manifestations of the rising temperatures on Earth. There is overwhelming evidence for significant human influence on climate change and the severity and frequency of extremes, such as meteorological, hydrological, climatological and geophysical events, particularly extreme heat, rainfall and drought show the extent of human impact on the environment. The latest MET Office Report (2018), part of ongoing in-depth Met Office analysis of the causes of the 2018 heatwave, demonstrates that human-induced climate change has made the 2018 record-breaking UK summer temperatures about 30 times more likely than it would be naturally.

Alongside the striking projections of further climatic changes (UKCP18), scientists expose how the adverse effects of rising global temperatures impact the environment in a number of ways. Not only do the extreme changes in the weather disrupt nature’s homeostasis, but rising temperatures threaten wildlife, ecosystems and vegetation, agriculture and food supply can also be highly damaged by rising temperatures, as there is a greater risk of drought. The unusually hot and dry weather reported in February has caused and contributed to the rapid spread of a series of wildfires across Saddleworth Moor in West Yorkshire and Arthur’s Seat Edinburgh, as reported by The Guardian.

Herein I want to underline the crucial importance of sociology to understanding the anthropogenic driving forces of climate change, as sociologists focus on array of socioeconomic factors that are closely interlinked to environmental changes. Introducing a perspective which explores the scale and structure of economic production and perpetual (over)consumption, new modes of mobility, technological development, geopolitical and economic arrangements dominant in the world could enrich our overall understanding of the social factors that influence both mitigation of and adaptation to climate change (Urry, 2009).

Integrating a sociological approach is salient for reaching a collective solution that incorporates both natural and social sciences and is practicable on global scale. Since sociologists often accentuate the effects of global inequalities, in the context of climate justice, it is important to grasp how the economic divide impacts disproportionately different groups across societies, the most marginalised groups of society tend to be more vulnerable when exposed to effects of climate change. Given the frequency of natural disasters in deprived areas of South America and South-East Asia, it is crucial to acknowledge that climate injustice is largely caused by economic and social inequalities. Sociologists point out that 75% of the world’s annual carbon dioxide emissions come from the Global North, which makes up only 15% of the global population (Holdren, 2007).

These striking numbers demonstrate the unequal levels of excessive consumption predisposed by capitalism and modern lifestyles, overconsumption across societies beyond ecologically sustainable levels is an issue which needs to be addressed urgently through sustainable development approaches, if we are to secure a more stable future for upcoming generations (Baker 2007, 2015). Therefore, the discipline of sociology can help the public and policy-makers to recognise the social, economic, cultural and political dimensions of climate change and offer alternative, collective ways of tackling this global challenge.

Lastly, I stress the idea of shared responsibility and urge individuals to perceive climate change as a pressing issue facing our planet. Indeed, those in positions of power, governments, large businesses and trans-national corporations play a huge role in corporate emissions, only 100 companies are responsible for 71% of global industrial greenhouse gas emissions (Carbon Majors Report, 2017). These numbers might make individuals feel helpless and powerless to the impending threat of climate chaos and disruption, yet it is vital to view collective efforts as necessary to protect the environment and contain the effects of global warming. Every small step towards sustainability counts!