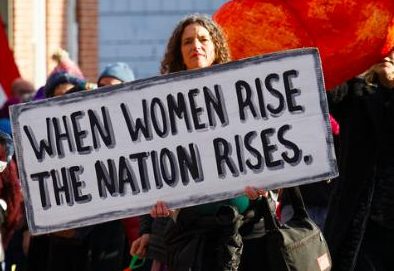 In the era of #Me-Too and Times up, gender has re-captured the mainstream debate and cemented the importance of intersectionality in the decision-making process. With the world set to reach climate change catastrophe in fewer than 12 years, can Ecofeminism provide an insight which would allow gender to re-ignite debate and save us before it’s all too late, or does the theory over generalise and exaggerate the importance of biology which brings challenges to fundamental feminist theory itself and dilutes the eventual aim of climate change survival?

Ecofeminism draws on ecology and feminist works to highlight why women are closer to the effect of climate change as well as why women are nearer to nature by virtue of biology. This is why they believe women should have greater involvement with the climate change movement (Barry. J 2007). However, for many modern feminists the assumption that biology makes women closer to nature seems counter-intuitive and regressive. Ecofeminists’ first major error is to assume that female characteristics are a product of biology and the capability to reproduce makes women closer to nature.

Feminists have tried for many years to tackle such assumptions and stereotypes linking female characteristics to biological function. Modern feminists such as Munroe Bergdorf believe that womanhood shouldn’t be marked by biological traits such as menstruation or birth but personal markers chosen by individuals. This ties in closely with the trans exclusionary debate which argues that women are only women by virtue of their biological being, therefore denying trans-women the status of female. Not only does ecofeminism come close to being labelled as a TERF theory (Trans exclusionary radical feminist), but it also makes broad assumptions on the processes which supposedly place women closer to nature.

Eco-Feminism relies upon patriarchal interpretations on what a female’s role in society is, and thus supports the patriarchal views that feminists have been fighting against for centuries. Women shouldn’t be reduced to their biological function of reproduction, this belief draws on stereotypes that women are caring and child rearing and therefore more naturally inclined to be the ones responsible for caring for mother earth. This also imposes the responsibility for climate change onto women. The climate catastrophe which we are currently facing should not be deduced down as a women’s responsibility, in this process we are reproducing the caricatures of women’s work as caring, responsible and nurturing whilst simultaneously placing women in the roles of those who should be cleaning up the mess. A mess that has been created by society as a whole, but in particular by men, as they are the ones who dominate the big businesses and states who have contributed the most to our destruction of our climate .

Female input is definitely needed within the search for a climate change solution. Women in the global south are more likely to be the ones who experience the effects of climate change first hand. Ecofeminism is correct in highlighting this. However, this is a part of the wider feminist movement of increasing the voice and power of such women in influencing decision-making and helping to find a solution to our current crisis. Ecofeminism does acknowledge this, however, their justification for why women experience this is flawed and over generalised which merely creates division within the already divided hunt for a climate change solution.

Some may feel that I’ve been too quick to judge Ecofeminism or that as a male I am misunderstanding much of the feminist debate centred around particular female functions and characteristics. However, climate change is an issue which is largely underestimated. We have now entered the Anthropocene, an era of human history dictated by human action. Sea levels are already rising at 3.2mm per year, threatening many low-lying islands, extreme weather events are becoming more frequent, challenging our infrastructure and understanding of life. We still have a long way to go until climate change is no longer a threat to our existence. The scale of the challenge ahead should involve more women. The decision-making process of states, businesses and academic research of ecologists could benefit from its own #me too movement. Women do lack representation throughout society and something should be done to overcome this.

However, I do not believe that ecofeminism is the solution to our issues. Ecofeminism offers a diagnosis of our ecological understanding; however, it fails to suggest any solution or plan as to how we can tackle the greatest threat of our time. Climate change doesn’t need the division and broad assumptions which ecofeminism offer, instead feminist reform which is already taking place in our society should help guide ecology to find an immediate solution which incorporates everyone as ultimately it is everyone’s existence which is under threat.