Walking down Market Street in Manchester, I have never seen representatives of the Catholic Church showing what that religion is about, especially after thousands and thousands of cases of paedophilia committed by those who preach and “practice” this religion; However, there is a spot where representatives of the Muslim faith are showing what their religion is about, and trying to separate religion from the term radicalisation or violent extremism. Where and does this difference come from and why?

The Oxford dictionary defines radical as a person who advocates radical or far-reaching political or social reform, therefore radicalisation is the process by which someone becomes radical. However, The Revised Prevent Duty Guidance for England and Wales defines radicalisation as the process by which a person comes to support terrorism and extremist ideologies associated with terrorist groups. Notice the difference in both definitions. Unfortunately, the 21st century is a century of complexity and many nuances, where there is much confusion with the terms, and the right meaning is used by a tiny percentage of the world’s population. Most regular citizens relate the word radicalization completely with Islamist terrorism, especially after 9/11. But, why does this happen?

The word radicalisation is a focus of study on terrorism and the formulation of anti-terrorism policies after 9/11. Many countries in Europe and the US have focused on curbing Islamist political violence within their territories, the concept of radicalization has become the main signifier in the so-called war on terror, which has provided a new perspective on Muslim minorities as the suspect community (Kundnani, 2012). The wrong use of this term has been used primarily by politicians for their electoral campaigns, confusing society more and more. Without going too far, in a clip of an interview made to Donald Trump during his election campaign, this character combines the terms as if one were the cause of the other. He mentions the word Muslims 5 times, radicalization 8 times, and security 3 times, in a 13-minute clip where he advocates in favour of a Muslim ban as a temporary measure for national security, while we get to know what the root of the problem is. It seems that it is much easier to focus people’s attention and confuse minds, rather than focusing on other security issues, such as the constant gunfire. That is what happens when a coward government is not able to provide security for its citizens and does not have an answer for other issues. It is easier to direct people’s gaze to another direction, regardless of the damage this may cause to members of society.

Discourse is a powerful tool that must be used with care, especially when leaders, powerful politicians, and media openly address the population not only of a country but of the entire world. This reinforces the erroneous idea that one has about a group of people. So how far can we go with the famous free speech? How free can people’s speech be? 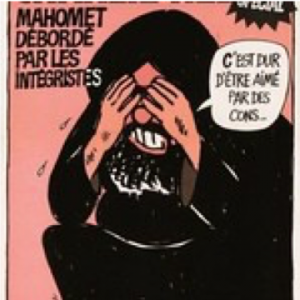 The media is a reflection of society, and society is a reflection of the media; therefore, I believe that the terrorist attack suffered by the newspaper Charlie Hebdo on 7 January 2015, is an example of how the freedom of speech of the media can be harmful, too. I hope my words are not misinterpreted here; I condemn acts of violence. However, when the media is responsible for mockery of the beliefs of a group that is already in the social focus in the West, which suffers discrimination, inequality, and social exclusions, those who can be seen as radicals may become extremists.

Something I have understood through the long readings that we do in university, by so-called diplomats, peacemakers, and all those who dare to write their opinion (myself included), is that we are so pedantic and arrogant when giving an idea, propose and try to find solutions to the problems of today’s society. We are far from being rational or have an approach to the solution of current social issues. The short research on the topic of radicalization that I did for this blog, instead of giving me an answer, has generated more doubts: How close are we to achieve equality? How good is trying to achieve integration? Should we talk about the meaning of radicalization or should we turn a blind eye? And what is worse, those who come to power and have the potential to be heard, do they know how to use the language they preach to speak? I think we all need a little less preaching and more practising.