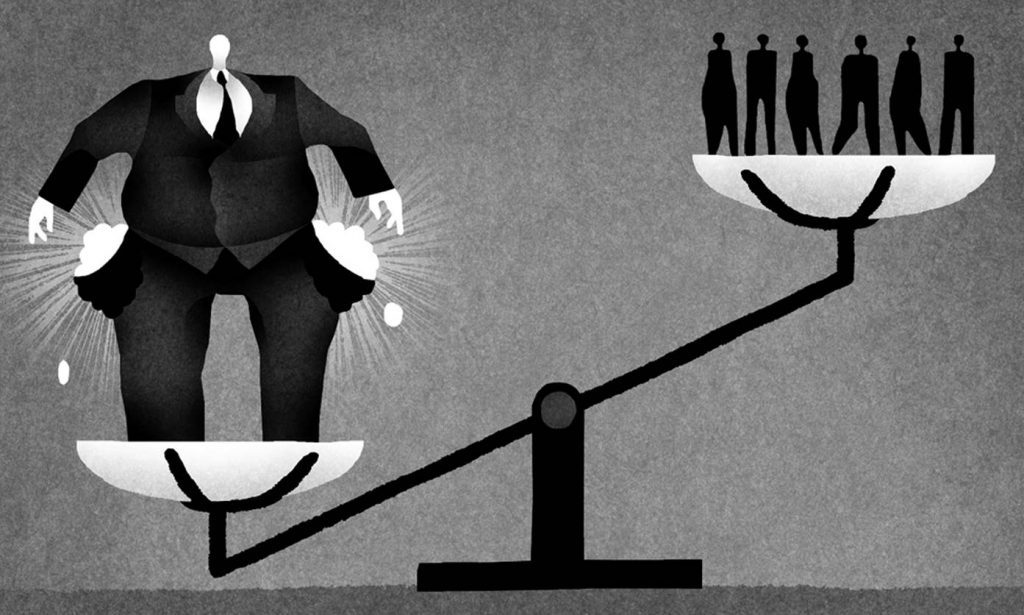 Inequality in global societies: why does it matter?

Inequality is one of the largest issues in the 21st century, but people often fail to grasp the complex and multidimensional nature of inequality. When looking at inequality, we must not only look at the differences between individuals within certain countries but also between countries themselves – as society becomes increasingly interconnected, it becomes more important than ever to understand inequalities on a global scale.

Figures from Oxfam show that just the eight richest men now own the same amount of wealth as the poorest half of the world and that the richest 1% own more than the rest of the planet. These figures show the alarming reality of how unequally distributed the world’s wealth is, and the rich are only getting richer – the same report also states that “one-third of the world’s billionaire wealth is derived from inherited wealth” and this figure will continue to grow as wealth is handed down to the next generation. This can be related to Piketty’s (2014) ideas about capital and inequality. Piketty’s two main ideas were as follows:

It is clear to see that inheritance plays a big part in maintaining inequality, but what solutions can we come up with to eliminate this? Should inheritance be banned or heavily taxed? Some argue that this is unfair to those who had earned their wealth to pass down to their children, but others could argue that children having wildly different opportunities and qualities of life merely due to the chance of what family they were born into is even more unfair. 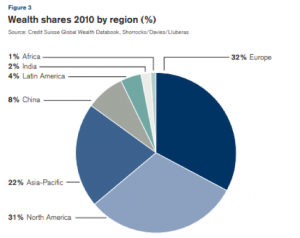 Thus, we can see that the distribution of wealth is unequal not only between individuals but between whole countries and continents.

One argument made to counter concerns of growing inequality is that in the past few decades, everyone (not just the rich) has gotten wealthier and abject poverty has been reduced. However, this fails to address the fact that the elite classes have gotten exponentially wealthier over time while the increase of wealth for other classes has been much less dramatic, meaning the gap between the rich and the poor continues to get wider and inequality continues to grow. 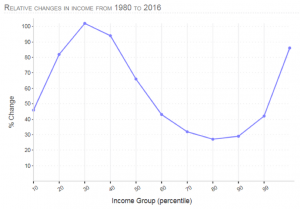 While this graph has been used to argue that inequality has declined since 1980 due to the poorest 60% of the population making the largest gains, this is actually somewhat misleading; the graph only shows relative gains compared to what they were earning previously. As pointed out by Jason Hickel: “The poorest 10-20th percentile gained 82% over this period [..]  but […] they started from a very low base.  For people earning $2.40 per day in 1980, their incomes grew to no more than $4.36 per day… over a period of 36 years.”. Meanwhile, while the richest in society may have a smaller percentage increase overall, their gains have been much higher due to having a much larger starting base. When looking at these figures in absolute terms, it becomes clear that the ones who have benefitted the most are the richest 1% in society.

So, we can clearly see that inequality exists, both within individual societies and globally, but why should we be concerned with tackling it? 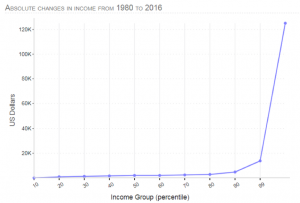 Well, there is data to show that greater inequality within a society is closely related to a multitude of social problems, such as mental illness, life expectancy and infant mortality, children’s educational performance, obesity, teenage births, homicides, imprisonment rates and social mobility (Wilkinson & Pickett, 2010, p. 17).  These correlated specifically to high levels of inequality rather than low average incomes, meaning that these social problems are caused by inequality rather than poverty and rich but unequal countries still face high levels of these problems (particularly those living at the bottom of these societies). Reducing inequality would likely reduce the rates of these social problems. But how do we tackle the problem of inequality? Economic growth and democratization do not necessarily lead to increased equality. Piketty suggests a global wealth tax and more progressive income taxes, but these would be difficult to enforce on a global scale. It is also clear that inequality within countries will have to be addressed differently to global inequalities. But whatever the solution may be, it is clear that we will need to take action to properly address the ever-growing problem of inequality.

Shedding light upon the devastation caused by economic inequality
Sowing the seeds of freedom: The global fight for food sovereignity
Feminism and sustainability