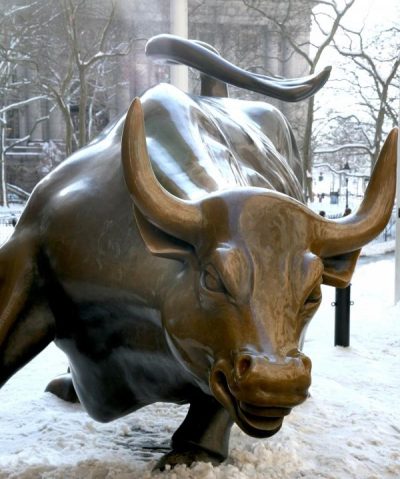 Taking the wall street bull by the horns

Just a few blocks from Wall Street, the charging bull statue has become a symbol of the financial world, of market optimism and the ferocity of free market economics. But with rising inequality in America, it may finally be time to take the bull by the horns, and change the way we look at the free market.

What we are seeing in the political landscape of America is that newly created wealth is increasingly going in the pockets of the already rich. In his infamous Communist Manifesto, Karl Marx seemed to provide early warning of this progression. He told us that capitalism would inevitably lead to stark inequality. That those who own capital will exploit those that do not; increasing working hours, creating inhumane working conditions and so on. So why didn’t we listen? In short, many U.S politicians have listened to the advice of Karl Marx. On the left side of the political spectrum we have notable names such as old timer Senator Bernie Sanders of Vermont, and the introduction of Alexandria Ocasio-Cortez and Rashida Tlaib into Congress. On top of these self-declared socialists, many Democrats are advocating for increased welfare for the poor, noting that redistribution of wealth is both necessary and the right thing to do.

So why has the U.S not seen any significant change in economic policy? Much of the blame can be put in the hands of the Republican party, and President Donald Trump. Much like when a bull sees red, when the Republicans see socialism, they tend to charge towards it with the intent of killing the policy. The Republican, libertarian argument for this action is that the market is best left to itself. It will, through natural processes, self-regulate in case of recession and guarantee the optimization and cheapest possible products for all members of society. A central claim of theirs is that increased taxes, for whatever purpose they serve, would actually hurt the poor as well as the rich. They claim it would hinder the wealth accumulated through the market, and that this wealth would then no longer be distributed for the common good of the public. The problem with this argumentation is that while there is a growth in GDP which is higher than most other countries, the benefits of this growth are going primarily to the rich, and not the poor. As Thomas Piketty explains in his book on inequality and economics ‘Capital in the Twenty-First Century’, the belief that the market will naturally and justly distribute wealth created is simply false. What he instead has observed is that the current stage of capitalism that the U.S and many other developed nations are in, is a stage in which a self-regulating market benefits the rich and not the poor. He explains that a central instrument for this divide is that ‘the annual rate of return on capital invested is higher than the annual growth rate of income’ In other words, that investing money which is already earned will increase wealth substantially faster than that of actual labour. Therefore, more government regulation must be necessary to combat this rising inequality.

So what exactly is the problem with the rising inequality that is observable in the U.S? Well, some studies indicate that increased inequality goes hand in hand with increase in social problems. In their book “The Spirit Level: Why Equality is Better for Everyone” Wilkinson and Pickett point to relations between increase in anxiety, depression and other social problems as inequality increases in society. These progressions seem to show an important aspect in the debate, that might often be left out. The idea that demanding that the rich do more is not just for the sake of being more equal in itself, but rather how that increased equality may hinder the development of negative social problems as well.

So the next time that someone uses the term ‘socialist’ derogatorily, perhaps they should consider all the positives that the word brings to the table. That a bit of socialism is just what the U.S needs at this time, as it brings with it increased distribution of future wealth created, and just as importantly, combats the negative social aspects that come with the inequality that we see today.

Sowing the seeds of freedom: The global fight for food sovereignity
Old... but still gold!
Is it all black and white? Radicalisation and terrorism in the modern day