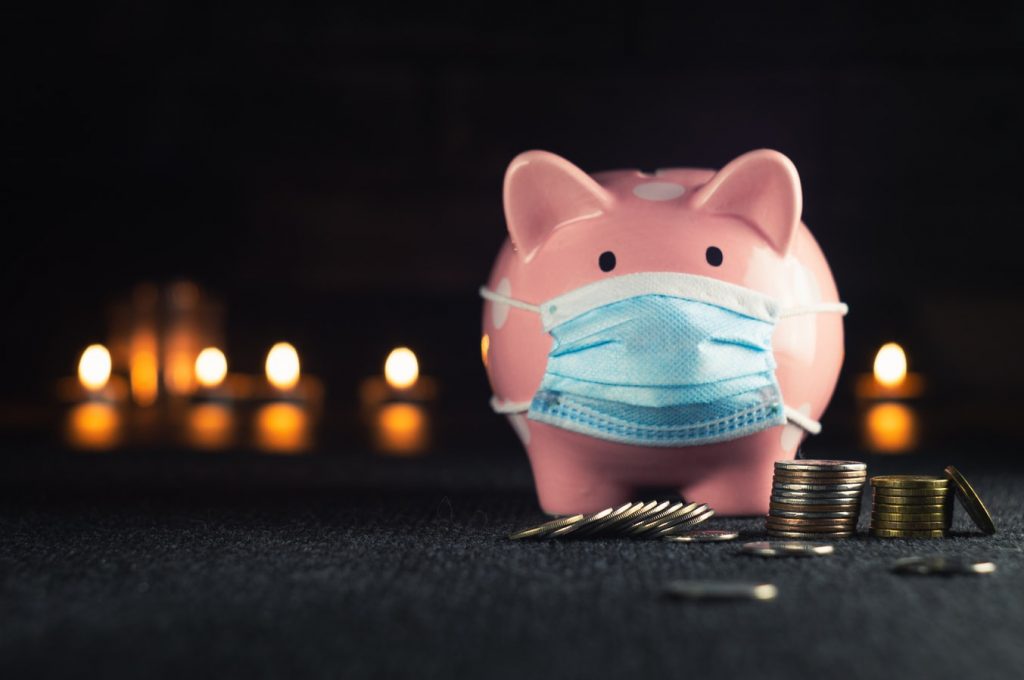 Being one of the greatest pandemics in history, COVID-19 has affected millions and caused countless deaths around the world. However, today’s global pandemic is more than solely a health crisis. Practically every affected country can confirm that the COVID-19 pandemic is also a socio-economic crisis. Peaking rates of unemployment and inflation spark other questions concerning the effect of today’s pandemic on existing socio-economic issues like global inequalities. Hence, in order to tackle current global social challenges, it is crucial to explore topics like the degree of inequalities both within and between countries, by taking into account the current pandemic.

Why do global inequalities exist?

According to global statistics, the combined wealth of the world’s 26 richest billionaires reached $1.4 trillion in 2019 and equates to the total wealth of the poorest 50%, which is approximately 3.8 billion people (Oxfam, 2020). This reminds us of the slogan, “the rich become richer and the poor poorer”. Data from the Guardian highlight that ‘Top income tax rates have fallen in all countries’ resulting in less progressive tax systems. In economically developed countries ‘top income tax rates have dropped from 66% in 1981 to 43% in 2018’ (Phan, 2020). This is one of many reasons that explain why high-income earners are becoming wealthier and therefore why the income gap between the rich and poor is widening. Furthermore, it has long been believed that the unequal distribution of income and wealth is an inevitable effect of capitalism, which can be explained through historical trends as seen in Figure 1 (Labergott, 1976). 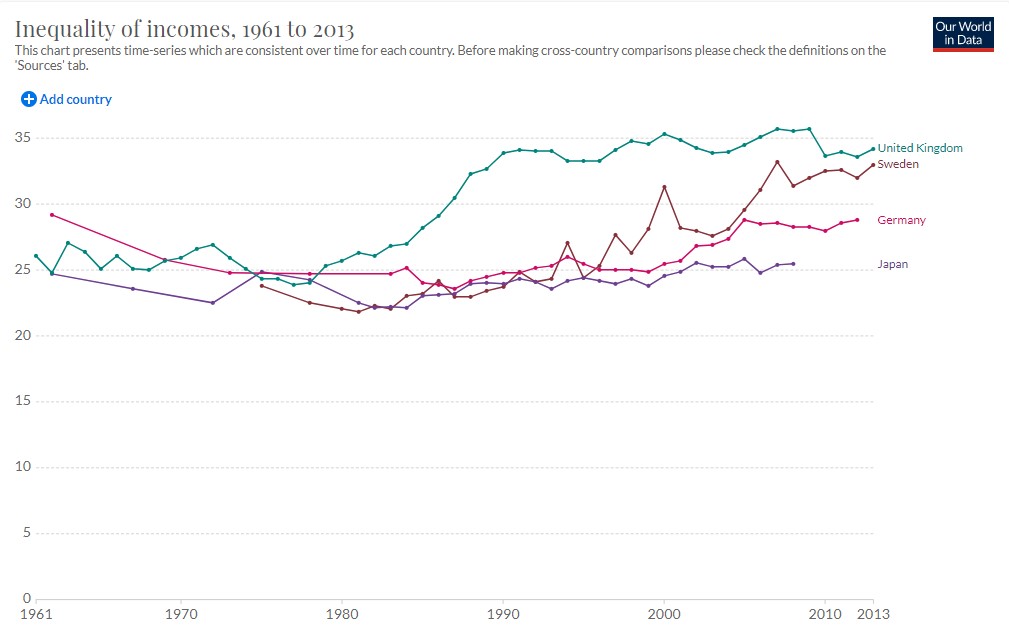 Based on Figure 1, income inequality particularly within wealthy countries, have increased since the 1980s, with the United Kingdom having the highest level of income inequality in recent years, in comparison to Sweden, Germany and Japan. However, in relative terms, global inequality among countries is falling. This is due to the fact that large and relatively poor countries like India and China are experiencing rapid economic growth. High growth rates in those emerging economies overtime have resulted in considerable poverty reduction as well as improvements in standard of living. Although this depicts a fall in global inequality, the latter remains vast since the ‘process of income convergence has mainly been limited to Asia’. This leaves some peripheral countries with high or unchanged income gaps over the years (ibid; 6).

What about COVID-19 and income inequalities?

At the moment, it is also relevant to consider the effect of COVID-19 on global income inequalities. The growth of developing economies over time was seriously hit by the pandemic, further enlarging the gap between the rich and poor. Safety measures to tackle the pandemic led to plummeting growth rates. For example, national lockdowns, purposely forced millions of employees to work from home. Cugat and Narita (2020) point out that a study by the IMF describes that lower income earners were usually unable to work from home as compared to high-income earners. Subsequently, low-income earners were more likely to end up unemployed or face wage cuts, which in turn deteriorated income distribution. This is validated by statistics showing that wage inequality rose by 30% during the COVID 19 pandemic (Aspachs et al. 2020). With COVID 19 as a driving tool of high levels of inequalities, many researchers believe that the latter have created several social ills in society. Before COVID 19, the most unequal economies were those where wealth was bequeathed from generation to generation. As a consequence, the super rich normally held more political power, which they used to sway policies to implement their own business interests. Needless to say, this can potentially lead to political instabilities. In addition, social problems such as violence and higher crime rates are also products of highly unequal economies. For instance, poorer individuals are more likely to commit thievery in societies where the rich are getting richer. Similarly, through inequalities, individuals understand their inferiority or superiority in relation to others and are therefore more likely to voice out their concerns in unethical ways. Figure 2, represen ts the posi tive correlation between income inequality and social as well as heal th problems, in wealthy countries. The trend shows that higher inequalities in developed countries lead to greater health and social problems. The latter include high cases of teenage births, mental illness, obesity and many others. 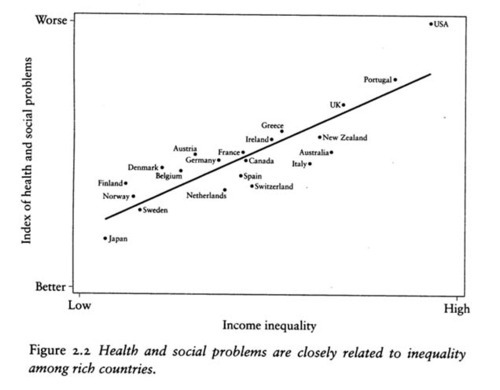 In the pre-COVID world, Picketty suggested the implementation of progressive income and global wealth tax. However, the use of progressive and wealth tax may not exactly be relevant in post-COVID societies that have faced severe economic damage. Aspachs et al. (2020) state that in light of today’s pandemic, governments in European countries like Spain were able to tackle the increase in income inequality through public transfers. Regardless of our pre or post COVID world, it is essential to find solutions to deal with current inequalities to avoid any social, political or economical issues that come with the latter.

King, B. and Pearce, N., 2010. The Contentiousness of Markets: Politics, Social Movements, and Institutional Change in Markets. Annual Review of Sociology, 36(1), p.1

Are women in the global south ‘victims’ or ‘saviours’ in the face of environmental challenges?
The Price of Freedom: The Effects of Colonisation on Inequality in the 21st Century
Materialism and Poverty in America