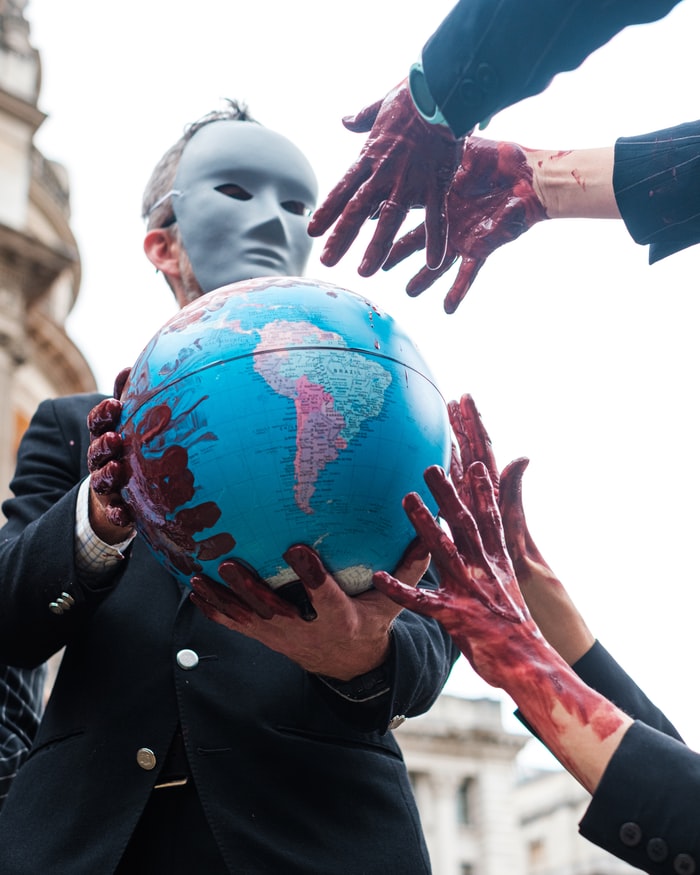 The Price of Freedom: The Effects of Colonisation on Inequality in the 21st Century

Global inequality is on the rise and colonialism is at the core. You should care and here’s why…

Many people think that globalisation has had overarching positive effects: according to the convergence thesis we are seeing the Global South catch up to the Global North as they become more industrialised and more independent. However, recently even some of the most staunchly conservative organisations such as the International Monetary Fund are beginning to realise that global inequalities are growing rapidly, and some see colonialism as the root cause of it.

Macionis and Plummer (2012) suggest that colonialism is the process by which countries profit from others via economic and political exploitation. Countries within western Europe colonised parts of Latin America, Africa and India, this process has led to the economic prosperity of the countries who colonised while others, typically those which faced the effects of colonialism, were impoverished. These countries were depleted of resources of profit and the indigenous peoples were forced to adopt the cultural practices of their colonial rulers. This began hundreds of years ago and only came to an end in the middle of the 20th century. After World War II the process of decolonisation began, Africa and India achieved independence from their colonial rulers between 1945 and 1960.

It can be argued that from then on, these newly independent countries continued to suffer, facing unprecedented levels of inequality. Each of these third world counties faced several problems due to their colonial past; they rightly felt suspicious of any European-style ideologies, they had an economy which had stagnated due to centuries worth of colonial extraction of their natural sources of profit and their people faced exploitation of their labour. Some countries had no governmental structure and so endured military dictatorship. Despite this, the international community believed that they had now entered a period of post-colonialism. However, with this as their starting point, how were these countries ever meant to compete against their former rulers? Yes, colonialism may be over, but its effects are still very much ever-present.

Anthropologist Jason Hickel argues that to understand global inequalities we must separate countries by those which were colonised and those which were colonisers, rather than simply the Global North and Global South. This viewpoint provides a remarkably interesting stance on the issue of inequality and the effects colonialism has in dividing who reaps the benefits of globalisation. 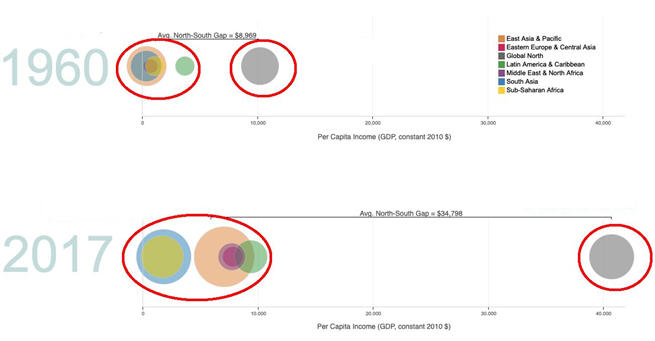 Increasing divergence between the Global North and Global South: https://www.jasonhickel.org/blog/

Hickel found that the average Per Capita Income Gap between the Global North and the Global south has grown exponentially since 1960 to 2017. In 1960 the Per Capita Income gap was $8,969 and in 2017 this gap has grown to $34,798. It is also worth mentioning that even as the population increased, most of these countries, as of 2017, still had an average Income Per Capita of less than $10,000, with Latin America and the Caribbean just tipping the scale. This reveals little change in income since the 1960’s for these countries. The story, however, for the Global North is vastly different. These countries, as of 2017, had an average Per Capita Income of around $40,000 compared to in 1960 when the average was Income was around $10,000.

Contrary to the ‘convergence thesis’, these figures clearly show that inequality between the Global North and the Global South is growing rapidly. We can see clearly that the Global North has profited massively from global growth and seem to have captured all of this new wealth. Whereas the Global South have had little to no change since the 1960’s. Hickel goes onto suggest that this divide is a result of a global system which is set up to ensure the prosperity of the Global North. The North exploits the South for their natural resources, cheaper labour, and captive markets where the consumer has little choice over which supplier to buy their goods from. This shows that in terms of a Global North-South divide nothing has changed since the colonial era, the power imbalances between these countries continues and this sustains, reproduces, and exemplifies global inequality. Hickel suggests that to solve inequality we need to tackle the problem at the source and dismantle these power relations. However, this proves politically challenging when these countries have massive influence over global institutions such the World Bank, the International Monetary Fund, and the World Trade Organisation.

Global inequality should concern us all. Whether within or between countries, high inequality negatively impacts every aspect of our shared social lives.

Why social movements Trump the corporation
Is Economic Inequality Really an Issue?
A Globe Obsessed with Profit Over People. Are We Too Far Gone?