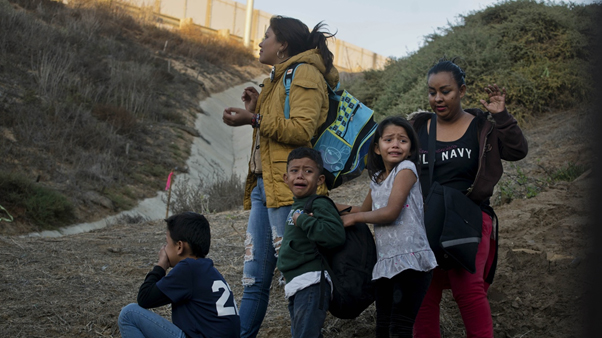 According to a report by the International Organization of Migration, there have been over 33,400 recorded deaths of immigrants when migrating towards another country since 2014. Due to increasingly strict border controls, immigrants are now forced to take more perilous journeys than ever, fleeing from countries in crisis. From trekking across deserts to taking treacherous boat trips across oceans, many are forced to endure unimaginable conditions for a chance at a better life.

Immigration is not a new phenomenon, it’s been occurring for centuries, so what’s changed and why is it suddenly being portrayed so negatively within our societies? The problem in today’s society, one could argue, is not with migration but the problem of attempting to stop it. Within Europe alone, the EU have proposed to triple funding for border management to €34.9 billion between 2021-2027. These increased efforts from states “are being enacted at precisely the time when migration has become an increasingly important part of people’s strategies for gaining access to much-needed life resources.” (Anderson, Sharma & Wright.) Many may have no choice but to leave their homes in order to survive. Effects from factors such as climate change and conflicts usually offer no other options but for people to flee. For example, the UN found that in 2018 alone, the number of people displaced due to conflict and violence was around 41.3 million.

It’s become evident that harsher immigration polices actually do little to nothing to deter people from attempting to or entering a country. Statistics prove when faced with life threatening situations, most will choose to leave, regardless of what may lie ahead; as Espenshade found “the total undocumented flow is largely unaffected by variations in the intensity of Border Patrol enforcement.” Therefore, what increased border security ultimately achieves is forcing people to take a more dangerous path to get into a country.

Not only do harsher immigration polices make it harder for someone to enter a country, but it also compromises the experience of the immigrant when they have entered the country too. For example, within the UK, illegal immigrants aren’t permitted access to any workers rights or access to housing, among many other things. In order for the state to justify the harsh treatment of immigrants, often the state will play on existing racist preconceptions of immigrants as the ‘other.’ This false narrative creates a hostility amongst the public towards immigrants, creating support for these stricter borders and justifying the classification of large numbers of immigrants as ‘illegal.’ For example, the USA’s recent president: Donald Trump, is a typical example of how immigrants are represented within right wing politics in the western world. He described Mexican immigrants as “rapists”, “lazy”, bringing “drugs” and “crime.” However, statistics show that immigrants actually contribute to a country’s economy. The UN states that immigrants tend to have higher entrepreneurial activity compared to natives and disproportionately contribute to innovation in countries such as the USA.

So, who is left to help these immigrants who are banished and turned away from these countries? Many activist groups have fought for years to improve the treatment and the rights of immigrants. Drastic action has been taken by certain groups such as the Stanstead 15, who blocked a government deportation flight from leaving Stanstead airport, deporting immigrants back to potentially life threatening environments in Africa.

Narrowly missing jail time, they were arrested under charges of terrorism. Other who’ve also aimed to aid immigrants in their movement are portrayed by the state as the biggest threat to migrants, due to the number of migrant deaths, distracting from the state’s harsh control practices. Therefore, further criminalizing those who try to help them, painting them as “traffickers” and “smugglers.”

As migration is rapidly increasing, (there’s now estimated to be 200 million international migrants each year), we need to come to terms with a changing world in which the free movement of people becomes a priority, within all societies. With climate change worsening, it’s only inevitable there’s going to be more large-scale displacement. In order to save the lives of millions, we must find a sustainable way to deal with this issue. We cannot simply ignore the inevitability of increased migration. As we’ve clearly seen the continuation of strict border controls will only lead to more deaths of innocent human beings, just like you and me.

Who’s crisis is it?
Is Britain Going Backwards? The free school meals u-turn and what it means for inequality
Ramifications of Globalisation: The monstrous form of corporate power