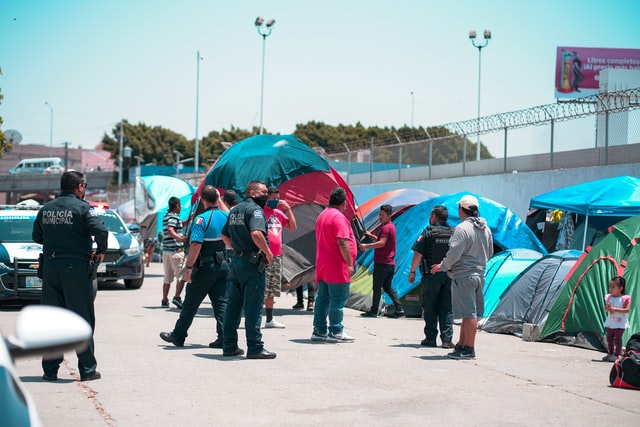 The globe is not a united whole. The Global North’s active avoidance to aid the Global South, despite their power and privilege, is a prime example of the world’s division. Global migration patterns show us that the largest migration flows are from countries in the Global South such as Mexico, India, the Philippines, Afghanistan etc. From here, they migrate to Global North countries such as the United Kingdom, the United States, Australia. The International Organisation for Migration (IOM) established that there were 281 million international migrants in the world in 2020 – this is even despite a known decline in migration due to the COVID-19 pandemic.

Although, migration isn’t something that has always existed. It evolved into our language when people started to settle down. It’s a construct. It’s managed by the individuals and structures that exist around us. This is because they influence the life of migrants and the views of them. Binaries (such as the Global North and South) put migration types into boxes which doesn’t allow them to be fluid. They homogenise migrants’ experiences. The media homogenises them too, but negatively.

The media are renowned for generating negative portrayals of immigrant. Arguably shaping public opinion as a result. They’re seen as unwanted, unpleasant people who are poisoning the societies of receiving Global North countries. The Migration Observatory found that the term ‘illegal’ was most used most frequently when describing immigrants as people. This is as opposed to words such as ‘EU’, ‘European’ or geographic terms like ‘African’. Alongside this, Western scholars and practitioners have been seen to understudy the causes or motivations of the Global South’s migration to the North, and the socio-economic affects the North are having on the South. Instead, research is focused on the impact of the increase in immigrants in the North. This demonstrates the ignorance of the Global North – they are in a position in which they can aid and accommodate those of who are less fortunate and are in need a better life. The Global South doesn’t have the same power and privilege, access to resources and media as the Global North. So, they are unable to study and spread awareness of the difficulties they’re facing. How can people with greater power, resources and privilege be allowed to ignore those with less power, resources, and privilege?

There’s a process behind peoples’ migration. In the North we have a very simple view of migration, but it’s complex. Many assume that immigrants move just for a better life, but it can be because of war/violent conflict, environmental factors, educational reasons etc. This basic view of migration has entailed a victim-saviour complex. The Global North are seen as saviours, whilst immigrants are seen as victims. Consequently, migrants are seen as problematic whilst the Global North is glorified – using misfortune to their advantage.

An example of migration is India. The Economic Times showed that India had the highest diaspora population in 2020 – 18 million. A lot of these people moved for better educational and job opportunities. This article also highlights how the United States received the largest number of international migrants in the world – with 51 million in 2020 – equivalent to 18% of the world’s total This demonstrates the influence the US could and does have over migration. This can make them very powerful due to the potential impact they could have over the accessibility migrants have.

However, despite the need for migration protection and the Global North’s ability to help with this, they make individuals’ migration very difficult. The London School of Economics’ blog addresses how Western discourse has a lot of power and influence over migration policies regarding migration into their countries. However, they have so much power, they also control migration policy action that occurs within the sending countries too. For example, the EU-Turkey Statement. This involved Turkey being required to restrain any illegal migration from them to the European Union.

To reiterate, it’s a countries, regions, individuals, and structures that construct migration. And the Global North’s individuals and structures construct migration to be difficult and inaccessible for some – despite their power and privilege. It would be best for the Global South to change the perspective of the world by using their experiences but, without resources, that’s not possible. Therefore, it must be the Global North. They can only be a saviour once they truly help.

American Detention Camps: for animals or humans?
Migration: Impact of COVID-19 on refugees
The Hostile Environment(alists)