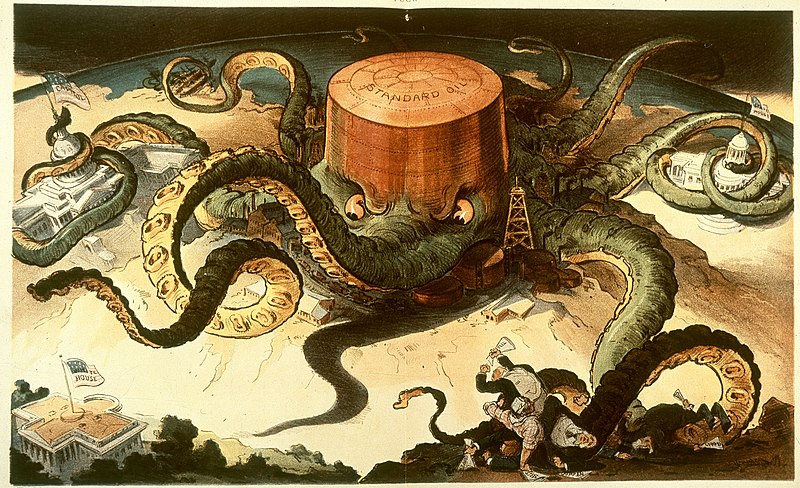 Is corporation a dictator taking control of our lives?

Corporations are dictators in the peak of their power. From the British joint-stock company known as East India Company, which controlled and ruled India between 1700-1800 to United Fruit’s creation of a ‘Banana Republic’ in Honduras in 1900. These corporations controlled the entire nation for the single purpose of profit maximisation. Today, it’s no longer acceptable for global corporations to possess military power or develop to those extents. However, arguably, the corporation remains significantly powerful today, influential in the global economy and politics. Capable of shaping public opinion and major international decisions. These Mega rich entities that own wealth comparable to the national GDP of countries still shares many dictatorial elements from the past.

Why should we oppose the idea of corporate control? Corporation interest is inherently irreconcilable with public interests, as the ultimate objective of corporations is to seek profit maximisation instead of human flourishing. Constructed around this objective, Corporations are anti-democratic in nature. They are incentivised to influence decision making, control thoughts and expressions and turn a blind eye to humanitarian principles for the sake of profit.

The treatment of corporations as a ‘person’ is known as corporate personhood in law. This allows corporations to lobby. Through lobbying, a corporation with its financial resources can have a much louder ‘voice’, incompatible with those of individuals or other interest groups, persuading politicians to stand for policies that benefit corporate interest with the promise of financial return and support. Corporate lobbying should be interpreted as anti-democratic as it undermines the principles of self-determination.

Even in the case where lobbying seems to be unsuccessful in terms of results, its influence can be clearly felt. Such as in the case of the Affordable Care Act in the United States, which aimed to provide public healthcare insurance and reform the private health insurance market. The act was successfully passed and enacted in 2010. However, significant compromises such as the cancellation of drug prices negotiation and amendment to import drugs had to be made due to opposition from drug and insurance companies who lobbied heavily against the act. The drug and insurance interest groups spent an estimated $380 million dollars to influence Obamacare in 2010, and further funding was provided to politicians urging them to challenge and repeal Obamacare. Republican politicians such as Donald Trump argued for the ‘termination’ of Obamacare in 2020, despite its success in reducing the number of non-elderly uninsured adults by 41% between 2010-2016. (HHS.gov, 2021)

Corporations also limit speech and expression through their ability to filter information seen by the public. Corporations can control formal sources such as newspapers and televised news to perpetuate particular views. An example of this is the purchasing of the Washington Post by Jeff Bezos, the CEO of Amazon, to use it as an advertising platform to advocate a positive image for Amazon. Social media companies such as Facebook, Twitter, Instagram directly control the speech and expression on their platform, deciding whether certain opinions ‘fit’ with their policy and through methods such as shadow banning limit the speech and expression these companies determine ‘unfit’. Instagram, for example, targets post by sex workers, post that comply with its terms of service is still taken down in the name of ‘anti-solicitation policy’ simply because sex workers post them.

Corporations are also arguably disproportionally influential in decisions regarding the environmental crisis. The fundamental driving forces of climate change and environmental degradation is increasing economic production rather than increases in demand for consumption. Alan Schnaiberg first proposes this argument in The Environment: From Surplus to Scarcity (1980), also known as the ‘Treadmill model’. The Treadmill model argues that consumer demands are shaped by the production decision of the producer (corporation). Events such as Black Friday and Cyber Monday that has devastating environmental consequences (the carbon cost of Black Friday 2020 is estimated to be around 429,000 tonnes) are not demanded by consumers but initiated and promoted by producers to bring in extra demand. Individual action holds limited effectiveness in addressing the environmental crisis, as it is the corporation’s interest that fundamentally determines the success of solving the environmental crisis.

In conclusion, corporations’ grip on modern-day society is much firmer than it should be. Alternative operation methods that seek human flourishing above profit maximisation need to be addressed and prioritised. After all, we don’t want cold-blooded psychopaths to dictate our society, do we?

Corporations: good or bad?
Enjoy the Refreshing Taste of Coca-Cola or Nesquik, with a Side of Human Rights Abuse
Is Capitalism the Cause of Climate Change?