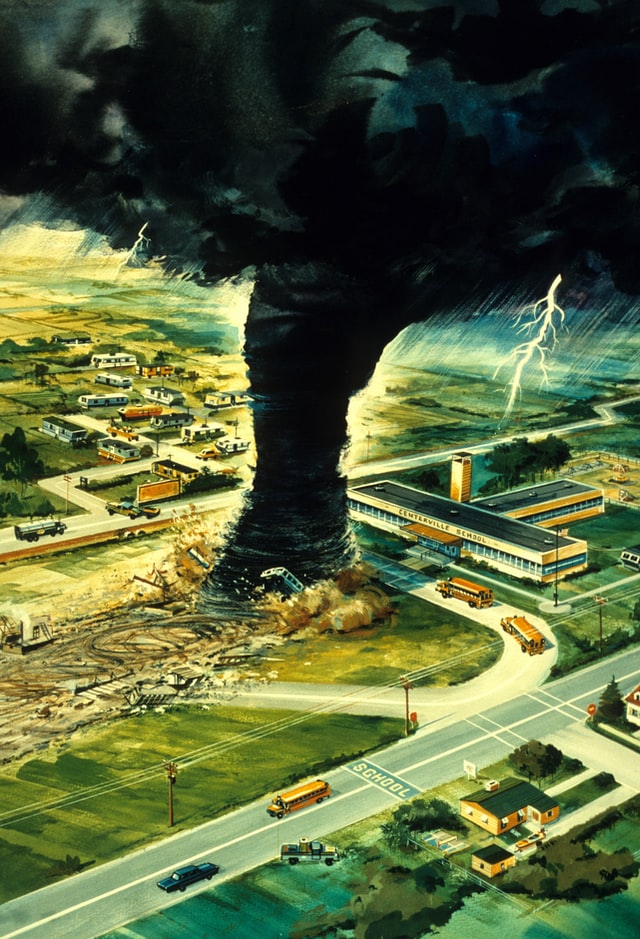 Climate change and migration: how the media presents climate migrants as the ‘other’

Photo by NOAA on Unsplash

We are being confronted with the consequences of climate change every day and the severity of it is increasing rapidly. One result of climate change is increased migration due to areas of land becoming uninhabitable as a result of natural disasters. It is not new that western media has been presenting refugees and asylum seekers as desperate and a burden on countries for years. The media response and predictions of climate migration have proved to be no different.

Maria Sakellari[1] studied the discourse of UK media on climate migration and discovered that the most common form of discourse in British news, when discussing climate migration rates, is depicting it as a ‘catastrophe’. She found that the visual representations of migrants are racialised and in line with colonial stereotypes. Having read a Guardian article[2]on climate migrants, it is clear that Sakellari’s analysis is justified. The article has an image of a dried river bed in Bangladesh with three people walking along it, holding a tv and two goats. This is an example of how the media aims to present climate change as a distant matter that mainly occurs in the less prosperous ‘global south’ as well as presenting migrants as desperate. They have presented climate migrants from the global south as the ‘other’ with a misconception that climate emergencies only occur there and therefore the path of migration will be from the south to the north. The article focuses on Europe being the main area that will become overrun with climate migrants, “Europe will be impacted by the most serious impacts of climate change.”[3] This disregards the impact of natural disasters on human lives and the ecosystem, instead focusing on Europe as a major victim of climate change, simply due to migration rates increasing.

This is an example of how the media is dominated by xenophobic discourse that sidelines the importance of forming government policies that will help climate migrants settle. Their suggestion that migration will be from the south of the world to the north is also not necessarily true. A study on the displacement of people in Australia during the bushfires of 2020[4] showcases how almost all displacement was internal and ‘most evacuees have been able to return to their home’[5]. Generally, smaller areas and neighbourhoods are impacted by natural disasters, so it is unlikely that this would cause habitants to leave the country for safety. It is more affordable and realistic to simply move to other areas of the country that have not been affected, which was the case in Australia. The media is creating an atmosphere of panic over an issue that may not be as impactful as they are predicting, rather than focusing on the serious impacts of climate change on human life and what we can do to help.

We have seen in the recent outbreak of war in Ukraine that this, despite not being a climate emergency, has caused mass migration out of the country. Ukrainian refugees oppose the image of what the stereotypical refugee should look like (according to media presentation) and as a result, they are treated differently in both the media and by borders. An article on this matter in the Guardian[6] stated that “there have been reports of people of colour trying to flee Ukraine, mostly students from Africa and the Middle East, being pushed back and suffering racial discrimination when trying to cross borders.”[7] This represents how the mistreatment of refugees from the global south is due to racialised hierarchies articulated in the media, as well as EU governments offering fewer rights to non-Ukrainian nationals who are in this case, students. This is a useful example for supporting the argument that the representation of climate migrants from the global south in western media is depicted in line with colonial stereotypes which have shaped global racial hierarchies.

The media commonly incites panic amongst people and creates an idea of ‘us’ versus ‘them’ when comparing the western world to issues in the global south, which has been seen in numerous instances. This is mirrored in the instance of climate change. The imagery used by western media has presented climate change as a distant problem that only occurs in the global south, creating an exaggerated prediction of how all climate migrants will flee to Europe. As well as this, the media generally presents refugees as people who are desperate and live primitive lifestyles. Global racial hierarchies have seeped into the media shaping a xenophobic and an ‘anti-migrant’ stance amongst Europeans, causing climate migrants and the global south to be neglected and portrayed as the ‘other’.

New migration, same agenda
Migration and pensions in Germany
Racism and Treatment within the Migrant Crisis