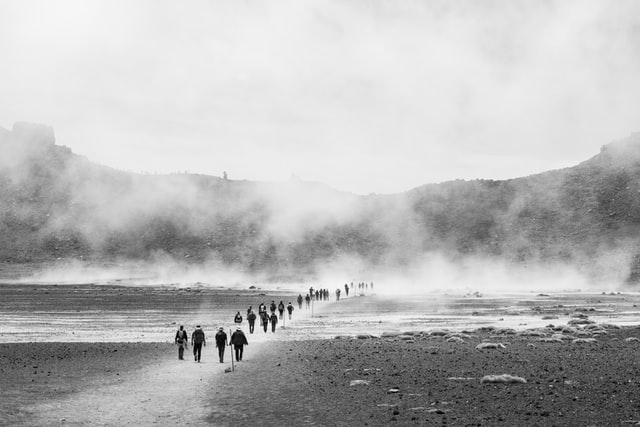 Article by May Southwood

Photo by Sébastien Goldberg on Unsplash

According to the dominant narrative, the migrant poses a severe and imminent economic and cultural threat; they threaten to saturate job markets in recipient countries and leave their home countries devoid of key workers, and they threaten to create social tension by introducing cultures that are incompatible with the dominant values of their destination and are treated with suspicion as potential terrorists. In addition, increasingly visible far-right discourses claim that migrants pose a significant environmental threat: their movement towards countries with high rates of emissions threatens to push these rates even higher, having a global impact, and they bring with them destructive habits which threaten to disrupt the ecosystems of receiving nations[1]. In response to these threats, governments across the global north are increasingly tightening their borders and crowing promises to quell the ever-swelling tide of migration rushing their way.

But how realistic are these narratives on migration?

In direct conflict with discourses presenting migration as a threat to the economic health of nations, immigration is often integral to economies. In Britain, where bordering in response to ‘the migrant threat’ has led to the controversial hostile environment policy (accused of violating national law[2]), Brexit has driven away EU workers, leaving many core sectors in crisis. Shortages in the care industry, which relies heavily on migrant workers[3], have forced the government to relax post-Brexit immigration rules to fill job vacancies[4]. Rather than taking desirable jobs away from local candidates, migrants are shown to have filled roles that ‘natives’ are reluctant to take up[5]. Similarly, eco-fascist claims regarding the environmental threat posed by migrants are revealed to have little basis in light of the relatively low-impact lifestyles of migrants[6] and the disproportionate climate impact of the very richest members of the global north[7]: the migrant is an illogical target of scrutiny.

Furthermore, the image of the migrant conjured by these discourses represents only a part of the reality of movement in a globalised world. In Illegality, Inc.: Clandestine Migration and the Business of Bordering Europe, anthropologist Ruben Andersson highlights the contradictory treatment of different ‘travellers’ – some celebrated for the movement they engage in and others objects of fear as a result of their movement. The label ‘migrant’, he argues, is reserved for this latter group. Ex-pats from the wealthiest corners of the global north are celebrated and idealised whilst ‘migrants’ from the global south and eastern European countries are painted as a threat to national and international security. Hierarchies within the category of migrant further complicate this picture; recent responses to Ukrainian refugees reveal Europe’s preference for white European migrants. European countries’ embrace of Ukrainian refugees is in stark contrast with, for example, their treatment of Syrian refugees[8].

‘The migrant threat’ is revealed to be a racialised, selective idea that does not represent reality, but rather constructs and pushes a particular, misleading interpretation of it. Through this process, the migrant – as the deviant mover made visible by popular, alarmist discourses – emerges as a created tool used for many purposes. In light of this, the bordering of the global north takes on a very different significance.

Andersson highlights how the process of bordering – for example through increasingly criminalising certain categories of migrants, developing surveillance and [physical] barriers at state borders and stepping up deportation efforts – is rarely effective in reducing migration rates. Instead, he suggests, it functions to keep undocumented workers vulnerable to abuse by employers and to provide politicians with easy votes through building fear around ‘the migrant threat’ without risk of repercussion from those affected – migrants who are denied voice through criminalisation.

Lea Ypi, Professor of Political Theory at the London School of Economics, suggests that the creation of ‘the migrant threat’ serves another hidden purpose: to divide the working class along national borders, reducing its potential to mobilize effectively against worker exploitation[9]; it functions to pit workers from the global north against those from the global south, obscuring international systems of capitalist exploitation and misrepresenting class conflict as state conflict: the threat global capitalism poses to workers is substituted with ‘the migrant threat’. As a result, workers are diverted from mobilising effectively against the real root of their suffering: capitalist exploitation.

This exploration of the hidden purposes of ‘the migrant threat’ is by no means exhaustive, but hopefully sufficient to demonstrate how its creation and abuse is detrimental not only to migrants from the global south but arguably many, many others; the generation of fear around ‘the migrant threat’ functions to justify and reproduce the status quo of global inequality in a way that benefits few.

How would ‘free borders’ encourage equality and promote an acceleration in economic growth?
Migration: Impact of COVID-19 on refugees
The Hostile Environment(alists)