Some investigations carried out by the Manchester Egyptian Mummy Team and other researchers in the field have been undertaken on whole groups or collections of mummies – either at archaeological sites or in museum locations.

However, there have also been intensive studies of one individual mummy (usually held in a museum or private collection) since these can add important information about health, disease, lifestyle and funerary customs in ancient Egypt.

One example, the ‘Leeds Mummy’ (the body of a priest who worked in the Temple of Karnak at Thebes over 3,000 years ago), was originally purchased by the Leeds Philosophical Society so that its members could undertake an early multidisciplinary investigation of the mummy in 1825, which was promptly published in 1828.

In the 1990s, the Manchester team was invited by the Leeds City Museum (current owners of the mummy) to undertake a new investigation of the mummy, using a range of available biomedical/scientific techniques. 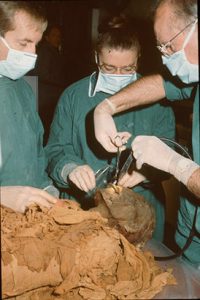 Tissue samples being collected from the mouth of the Leeds mummy. The mummy was found to have his mouth open and samples were taken to determine why – it is thought his tongue was swollen at the time of death possible due to an insect sting.

New information was added by means of CT-scans, and anatomical, dental and histological examination. These showed that the priest had suffered from a parasitic disease (filariasis), as well as atherosclerosis, a diet-induced disease usually associated with a modern lifestyle. This condition was also not uncommon amongst the elite (particularly the priests and their families) in ancient Egypt.

At the conclusion of the daily temple services, the resident priests received their stipend in the form of food offerings which had reverted from the gods’ altars; this rich diet (unlike the simple food consumed by the non-elite) was conducive to atherosclerosis.

Other individual studies undertaken by the Manchester team include the mummy of a woman, Tahemaa, owned by the Bournemouth Natural Science Society; and the mummy of a young priest, now in the collection of a stately home in North Wales, apparently brought home from Egypt by the great-grandparents of the current owner.

Another remarkable mummy, named Takabuti and currently on display in the Ulster Museum, arrived in Belfast from Egypt in the early 19th century, when it was partially unwrapped and investigated by local historians and natural scientists.

Several years ago, the Ulster Museum invited the Manchester team to join colleagues in Belfast to undertake a new, multidisciplinary investigation of the mummy. Building on this research, further studies are planned, to enhance knowledge of this woman’s health, lifestyle, and possibly the cause of her death.

The mummies from Leeds, North Wales and Belfast were all transferred to Manchester for short periods where advanced technology was employed for intensive investigation. As a result of these studies, the Leeds and Belfast mummies became the subject of widespread interest.

Permanently exhibited on galleries in their respective museums, the mummies are accompanied by information which describes and explains the scientific findings, while associated facial reconstructions, based on anatomical evidence, enables visitors to see how the person appeared in life.

Publication in high-impact scientific journals and in books and articles with wide general appeal, as well as informative and popular television documentaries, have all contributed to public awareness of this research.