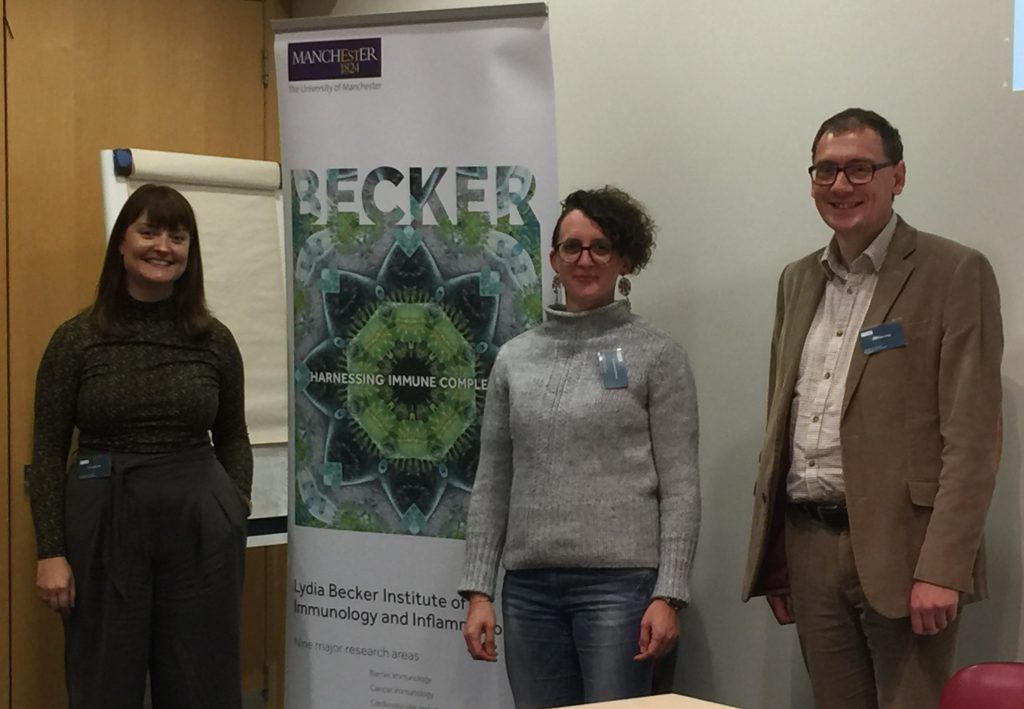 Biota, Bugs and the Becker

The first one-day workshop of the Pathogens, Parasites and Commensals branch entitled “Biota, Bugs and the Becker” was held on 25th November at the University of Manchester.   The workshop was well attended drawing on research staff and students with an interest in the microbiota, immunology and inflammation, from right across the Faculty.

The day kicked off with the first of three keynote speakers, Lindsay Hall from the Quadram Insititute in Norwich.  Lindsay spoke about her multiple areas of interest in the role of the intestinal microbiota in health and disease with an emphasis on the importance of early life gut microbiota in establishing subsequent immune health, particularly the role of Bifidobacteria, including exciting clinical data indicating beneficial roles of Bifidobacteria in premature babies. Francesca Ronchi, from the University of Bern, followed with an excellent overview of interactions between the microbiota on the innate immune system, the inflammasome and the influence of the microbiota on neurological development together with her new data from behavioral studies in a germ free environment.  Lunch was followed by a more clinically focused talk from Holm Uhlig from the University of Oxford who highlighted how his studies of rare forms of intestinal inflammatory disease can inform on our understanding of mechanisms operating in microbiota mediated intestinal inflammation, in particular regarding regulation of macrophage metabolism which is a rapidly developing field.

A series of rapid “flash” talks were then presented by researchers from several groups in Manchester about the ongoing work into the microbiota in Manchester, from rodent based model systems of immune mediated disease and the use of the Manchester Axenic and Gnotobiotic Facility, through to studies of skin microbiota in the ageing population.

The scientific sessions were finished off with an extensive “round table” questions and answer session for the invited speakers. It was great to hear where the field is going and some “big picture” questions and answers including how the speakers maintain their own “healthy” intestinal microbiota with dietary modulation or supplements.

The Director of the Becker Institute, Tracy Hussell, closed the workshop with a few concluding remarks emphasizing how critical it was to incorporate microbiota into our thinking of whatever area of immunity and inflammation we were investigating and how we were so very well placed having germ free facilities here in Manchester, alongside outstanding immunology and microbiota expertise, finishing off with a brief comedy turn! The day rounded up with drinks and canapes, where everyone agreed as to how successful and interactive the day had been. We look forward to the second workshop.