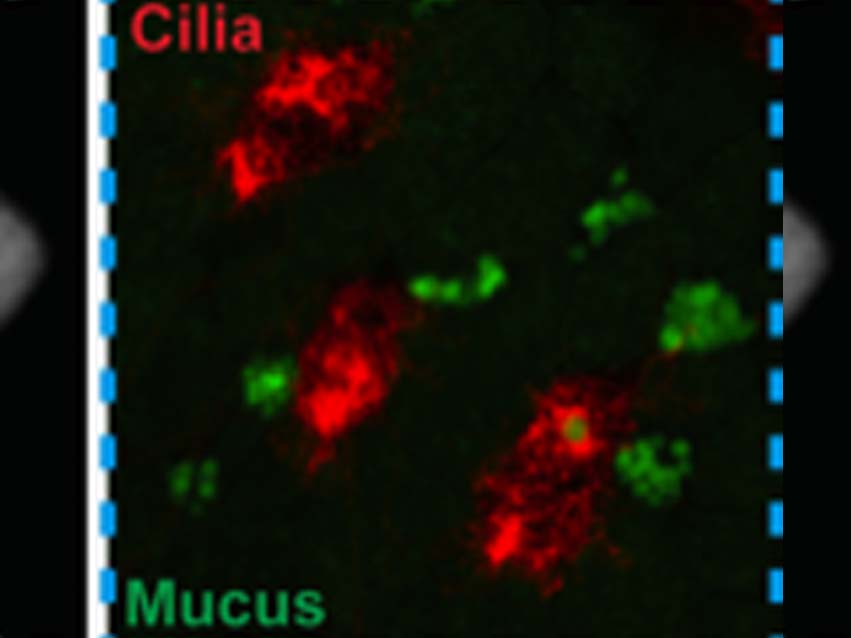 The upper human airways are lined with a mucociliary epithelium, where mucus traps particles and pathogens (e.g. bacteria) and cilia beat to generate flow to move the mucus (and trapped material) away from the lungs. Improving our understanding of this process will lead to the development of new therapeutics to treat airway diseases such as asthma, COPD and cystic fibrosis.

Dr. Eamon Dubaissi, in collaboration with Professors David Thornton, Ian Roberts and Richard Grencis (all of the Lydia Becker Institute of Immunology and Inflammation), is developing a new model to study mucociliary epithelia – the skin of the tadpole from the frog species, Xenopus tropicalis. The tadpole skin has mucus-producing cells and motile ciliated cells, just like those found in the human airways. Funded by a grant from the National Centre for the Reduction, Refinement and Replacement of Animals in Research (NC3Rs), the researchers aim to generate a live fluorescence model of mucociliary clearance using the tadpole.

They have produced an animated video to explain exactly how the model is being developed and how it can be used in future, with emphasis on its potential to replace mammalian models that are currently employed to study mucociliary clearance in health and disease.