Cyber-landia – or – ‘The algorithms know best’

A day in the life…. ”Liisa wakes in her 30th floor apartment overlooking the bay. There’s another climate dust storm coming – people can air-lock their doors and windows, but walking or cycling in the city gets more difficult. Everything else seems ok, as she starts her day in the 4D-print business, with a VR-conference to her office network in Berlin & Beijing. After, she might go for lunch with friends, downtown on the AV drone-taxi platform. Her main worry is her two teenagers – education, work, social life, their whole life is by the neural implants, which are very difficult to disconnect: are the young people now living in virtual reality or ’real virtuality’? She also worries for her parents, having few digital skills, with their lives ’organized by algorithm’. Some activist communities disagree with this ’cyber-government’, and construct a new life off-line, but then they are outside society, and the authorities think they are hackers or terrorists. And then there are bigger questions, when all our material needs are so well organized, what is life really about? 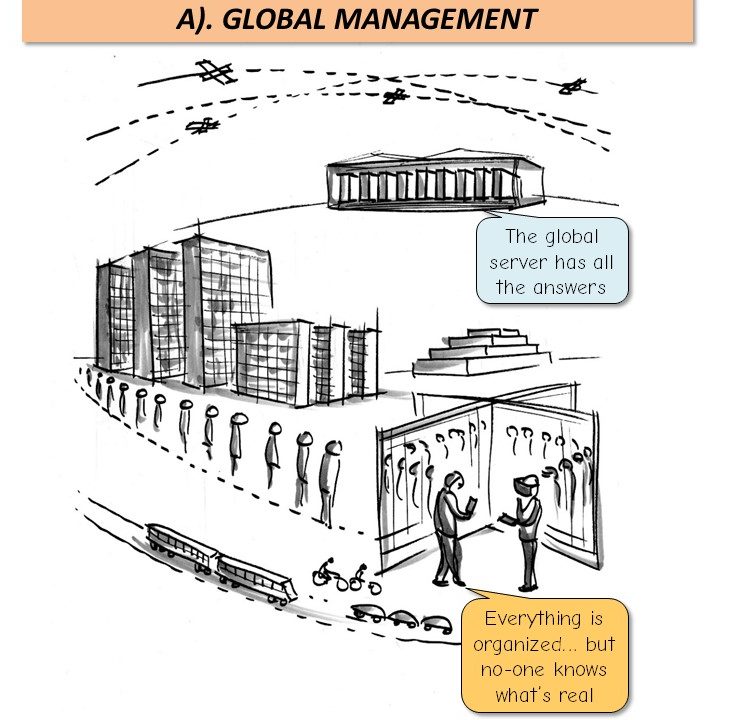 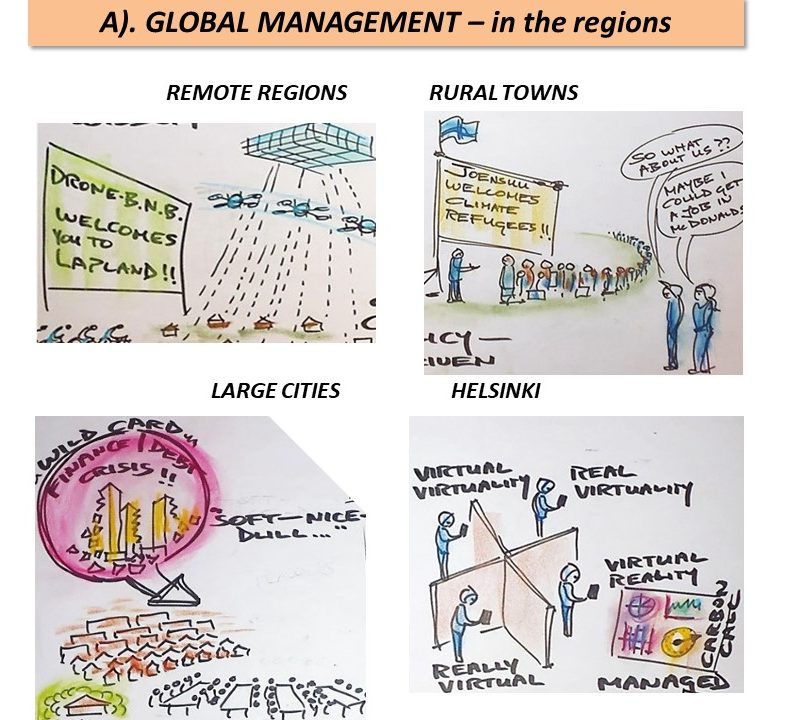 The digital revolution goes further and faster in the next 25 years, than anyone could expect, as the major platforms (google, FB etc) combine and collaborate with democratic governments, from local to global. The result is a society more equal and transparent, with the ability to manage climate change and resource use. The downside is a controlling ’government by algorithm’, which pushes the younger generation in particular to live and work more in the virtual world than the real one.   More people want to be in the central metropolitan region, as much for social life as for material reasons, as many jobs are now replaced by robots. For the cities, the algorithms seem to provide the optimum of urban design, in high-density mixed-use communiites. Even the rural areas and remote regions are ok, growing by planned migration. But again there is a growing sense of paranoia, that society is run by and for the machines…

Counter Dynamics: The global management system appears almost perfect, but underneath there are many gaps and cracks: government by algorithm has faults built in by the coders: economy by algorithm struggles with creative innovation.

Wild cards & shocks: The global digital systems suffer a catastrophic super-virus, possible by terrorists, or possibly from the ’off-line activists’, who fight against ‘government by algorithm’, with hack-attacks. Many younger activists (and some older) organize a resistance, which aims to build an alternative ‘live-feed’ government, human rights for privacy and liberty, and search for ‘corruption by algorithm’.

Economic disruption is likely with digital transformation: many jobs will be replaced, with great uncertainty on how or where. Social welfare will also transform, with the Universal Basic Income the only practical option, but this needs a complete rethink of public finance and the macro-economy.

For urban development, the urban focus is already in the text-books, but we can expect many un-planned side effects. Government structures and public services again looks like those of the text-books, but it’s very uncertain how this could adapt to distruptive change, social-cultural differences, or a growing culture of resistance.

For queries on this site - joe.ravetz@manchester.ac.uk

For general University of Manchester issues,