Conserva-landia: – or – ‘nature is reserved’

A day in the life… ”Kaisa was hiding out in a disused forest cabin.   She came from a family of landowners, who now managed a large nature conservation area north of the city. But now she was in trouble. She had seen how the nature conservation laws gave the wealthy farmers new freedoms: to control local democracy and buy out local businesses. Then they could grab large areas of forest and sell them at huge profit to the global billionaires, to come and build their ’eco-zone’ utopias. A few high-value tourists were allowed in, but the local people were lucky to get low-paid jobs as gardeners or cleaners. Kaisa had tried to organize the village workers into a labour union, using access to her contacts on the global networks, and then tried to set up a local food cooperative business. But this made her unpopular with the elite, and now she was struggling with insecure communications, mental paranoia, and winter approaching. A few activist friends would come with food, in the dark, and try to make plans for the future – should they stay or leave? (NOTE – this story might be too extreme) 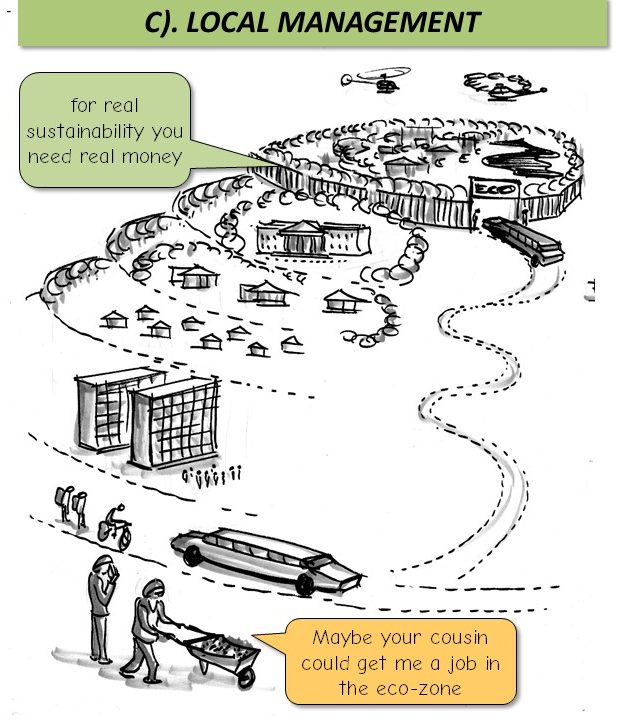 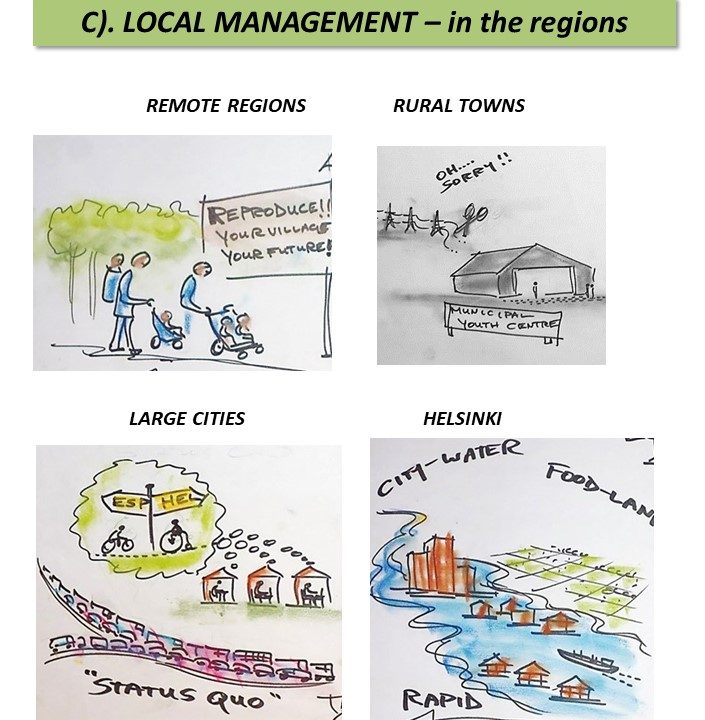 Finland went local, in a reaction to the forces of globalization and deregulated markets. But the result was not the expected freedom and community development: the result was that local communities were arranged into hierarchies, based on land and property and resources. Those who could trade on their assets became rich, while others were disconnected from global markets and opportunities, pushed towards low value jobs.

The most extreme cases were seen in the nature conservation areas, where local landowners formed cartels to sell prime locations to incoming billionaires. Rural regions saw population growth, mainly in the towns and cities with less mobile populations, but social solidarity and labour organizations were suppressed. In the urban areas, neighbourhoods became almost stagnant under conditions of low growth, with an invisible system of control and mafia-like patronage for access to housing and public services.

Counter Dynamics: To combat the over-rigid local hierarchies, many get involved with global networks for community & culture.

Wild cards & shocks: A financial crash brings massive impacts on public finances and private businesses. Such an event could start in Sweden, as a result of over-geared property markets based on FDI: turbulence in the Middle East starts a chain reaction, which ends up as a crisis for rural municipalities in Finland.

This scenario raises questions on the standard assumptions for growth and globalization: there is growth but not as we know it. There is also nature conservation and climate management, but again not as we know it.

The structure of governance and policy-making is also challenged here: the current focus on ’ambiguity’ in a democratic system, may be turned around in a more hierarchical and nepotistic system.

For queries on this site - joe.ravetz@manchester.ac.uk

For general University of Manchester issues,