I am an architect working and living in Bucharest and a 1st year PhD student at the Sheffield School of Architecture. In 2018 I graduated the MA in Social Research at the University of Sheffield. In 2006 I co-founded the architectural studio and spatial practice studioBASAR, which is engaging the public and community space of contemporary Bucharest, acting as a vehicle for my practice-based PhD research, involving live projects, co-design, co-production, place making and civic pedagogy.

Athanasiou investigates relationships between the bodies of architectural professionals and unwieldy institutions from the A.I.A. to the self-made man. Trained at Rhode Island School of Design, he has practiced architecture with archaeologists, academics, architects, and the city of New York. As a Phd candidate in the History of Architecture at Cornell University, he asks what kinds of questions come from thinking about a professional’s conduct c.1900.

I am a PhD candidate at Sheffield School of Architecture (SSoA) where I also finished my MA in Architectural Design. My research aims at investigating humanitarian response in Za’atri refugee camp by understanding the spatial configurations of the camp environment. Following a practice-based approach, I explore my research question by situating myself in the everyday life of humanitarian procedures. During the years; 2014, 2016, and 2017, I worked closely with one of the International NGOs operating in the camp. As an Arabic-speaking feminist and a reluctant architect, I am interested in exploring creative modes that would help in reciting the architecture of the refugee camp.

Brett is a PhD Candidate in Architecture at the University of Manchester, UK. He holds degrees in Political Theory and Theory and Criticism from the University of Western Ontario. His doctoral dissertation follows the making of a building in Manchester, UK (case study: Factory, OMA) and traces the complex ecology of expertise of architectural projects as well as the politics of these developments. His most recent publication is “The Garden of Bifurcating Paths: Towards a Multi-Sited Ecological Approach to Design” in Ardeth.

Cathryn is a PhD candidate at the School of Architecture at The University of Sheffield, UK. Interested in the intersections between contemporary art and architecture, her work engages in feminist and queer methodologies in urban space, as well as ways of engaging sensory creative practice. Currently her research is exploring architectural identity and cultural place-making in contemporary Tokyo.

Architect by ETSAM (Madrid, Spain), PhD researcher at the University of Alicante. He collaborates in the research group of Critical Pedagogies, Ecological Policies and Material Practices, at the same university, and develops a research focused on material ecology in architecture. He has developed workshops in several universities related to that topic. His interests focus on the effects of matter agencies on human communities, towards the recognition of more symmetrical ways of relating, through architecture design.

Edoardo is a PhD Student in Architecture. History and Project at Politecnico di Torino. He graduated in Philosophy at the University of Turin. His doctoral research aims to balance a traditional philosophical inquiry and a more empirical one. Specifically, it consists in devising an operative definition of design able to produce descriptions of “architectural actions”, namely action performed by architects aimed at realizing the object of a design representation.

Elena is a PhD student in Architecture. History and Project at Politecnico di Torino (Italy), where in 2015 she completed her MSc degree. During the Master and the PhD studies she has also taken part in several collaborations, and she is currently the co-organizer of the Synthesis Seminar on Master theses in progress. Her research is related to in complex urban and architectural transformations processes – followed from the inside – in their decisions, negotiations, and design practices.

Eliyahu is an architect, currently pursuing a Ph.D. in the History, Theory, and Criticism of Architecture and Art program at MIT. He is the co-editor of the 46th volume of the department’s peer-reviewed journal Thresholds, published by the MIT Press. Eliyahu holds a B.Arch from Israel and an MDes. in History and Philosophy of Design with Distinction from the Harvard Graduate School of Design, where he was awarded the Dimitris Pikionis Award. His research engages the intersection of architectural representation and imagination, politics and technology. He is currently investigating apocalyptic imaginaries in visionary architecture during the rise of nuclear weapons at the dawn of the Atomic Age.

Emine is a PhD Candidate in the Taubman College of Architecture and Urban Planning at the University of Michigan. Seda’s scholarly work focuses on the intersection of architecture, media studies, and German studies, with an emphasis on the technologies and materialities of space. She is the recipient of the 2018 Carter Manny Award in Research by the Graham Foundation for Advanced Studies in Fine Arts, and the 2017 Dr. Helen Wu Award.

Federico is a PhD student in ‘Architecture. History and Project’ at the Politecnico di Torino. Active member of Ardeth’s Editorial Board, his research activity explores the uses and the powers of narratives in the architectural design practice. He is currently working on a book project aimed at disproving the artistic/authorial nature of architectural design through the use of ethnographic experiences produced during a cycle of didactic activities he helped to coordinate.

Francesca is currently a Ph.D. student at the Politecnico of Turin. Her research interests mainly concern the architectural practice during the eighteenth century, a turning point for the development of the liberal profession. With the aim of detecting the ordinary activities of an Eighteenth-Century architect, using some methods borrowed from Social Sciences, she is studying the architect’s archive: documents and drawings produced in the daily practice of the profession.

Lenastina is an architect and Ph.D. Student at the division of History and Theory, School of Architecture, KTH, Sweden. She holds a M.Arch from the Bartlett, UCL, and has subsequently worked as a lecturer at KTH as well as a practicing architect, most recently with the newly finished transformation of the Nationalmuseum in Stockholm.

Mennatullah is an urban planner and designer who aims to inspire sustained and empowered development by communicating research for a just socio-spatial reality. She is currently a research associate and PhD student at TU Berlin. She is also an associated researcher at the Leibniz Institute for Research on Society and Space in Erkner and an assistant lecturer at the department of urban planning and design in Ain Shams University in Cairo. She certainly practices planning for empowerment aiming to cover the gap in theory building in contested urban contexts. She believes in the importance of transferring knowledge/systems between nations through win-win means.

Nushelle is a PhD candidate in architectural history at the Massachusetts Institute of Technology. Her research is broadly concerned with the politics of display; past work has examined Cold War exhibitions, contentious museum collections, and the fate of monuments in times of crisis. Her dissertation, titled “Protocols for the Peripatetic: The Emergence of the Circulating Exhibition, 1946-1980,” examines the UNESCO-ICOM partnership established after WWII and its influence on museum practice.

Sabine is an architectural researcher who studied in Stuttgart (Germany) and Tokyo (Japan). After working in architectural practices and as a freelance editor for the architectural magazine ARCH+, from 2013-2018 she was member of LIA at the Technische Universität Berlin and the Cluster of Excellence Image Knowledge Gestaltung at the Humboldt-Universität Berlin. Both provided the framework for her doctoral thesis Monospace and Multiverse. An Architectural Exploration of the Sainsbury Centre for Visual Arts with Actor-Network-Theory.

Tatjana has just completed her PhD at the Architectural Association, London. Her research focuses on the psychological and philosophical construction of body image as it relates to ‘immersive’ environments, which include virtual realities and the architectural spaces that test our sensory perception. Tatjana completed her Masters in Architecture at Harvard’s Graduate School of Design, Bachelors in Architecture at Rice University and has practiced at the architecture firm Skidmore, Owings & Merrill, San Francisco. 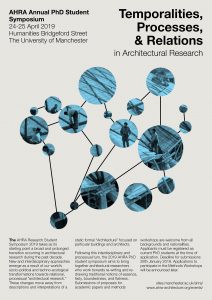