The Human Genome in the Library

In ‘The Library of Babel’ (1941), Jorge Luis Borges imagines a vast library that contains ‘no two identical books’.[1] Instead, the library contains all books that might be printed using 22 characters plus the comma and the period: ‘each shelf contains thirty-five books of uniform format; each book of four hundred and ten pages; each page, of forty lines, each line, of some eighty letters which are black in colour’ (p. 79). The ‘universe, which others call the Library’ therefore contains a near-infinitude of possibility including texts identical to one another apart from one minor typographical difference (a missing comma, a misspelt word). This includes nonsense: ‘for every sensible line of straightforward statement, there are leagues of senseless cacophonies, verbal jumbles and incoherences’ (p. 80). So the library seems closed but in practice (!) is infinite, given that it contains all variations of the language. The narrator of the story believes it replicates itself. The library stretches as far as anyone can imagine, or know, and no one has ever got to the end of it. Madness and suicide are common. It both means everything and means nothing. Trying to understand it is impossible.

I have been reading Borges recently and thinking about multiplicity and infinitude.

It was in this frame of mind that I visited the library in the Manchester Royal Infirmary, home to a printed version of the Human Genome (only one of three hard copies in the UK). It is really quite large, although the letters are printed in 4-point font. It is bound in colours corresponding to the ways that chromosomes used to be distinguished. 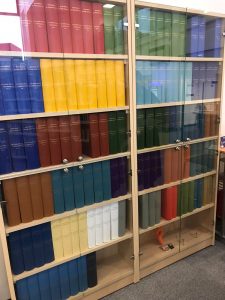 It is unexpectedly moving to be in the presence of this achievement, in print. The size is impressive, and the material cataloguing of the genome is awesome, in the true sense of that word.

This textualisation of the human joins other maps of the body that have been attempted in print, from early anatomy books to books of poetry. The crucial aspect here is that it has been printed. It becomes a ‘text’, related to all other texts in the great library of the humans. The Human Genome becomes cataloguable, something to be forgotten and ignored. It becomes a genre, something to be understood in the light of other texts, compared to and engaged with. It is a work of imagination and interpretation; it is the body written. It is the book of life, both easily storable in a bookshelf and immense, nearly infinite in its possibility. 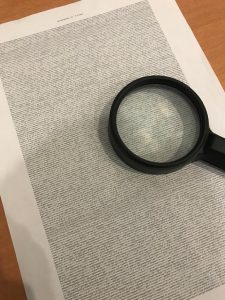 The expression of the human as text turns it into something different to the corporeal. The book of life might be studied, catalogued, interpreted, corrupted, disordered, (mistyped?). We might theorise the narrative presented here, postulate a type of reading practice that is demanded. The text is subject to Derridean analysis, might be engaged with and interrogated, historicised, misunderstood, misquoted. We might consider the power relations inherent in its production, use it as a case-study to comprehend contemporary textuality and meaning, debate the relationship between the material and the corporeal.

Umberto Eco’s 1980 historical murder mystery The Name of the Rose features a hexagonal library, essentially modelled on Borges’s imagined space, in which dangerous knowledge is jealously guarded. The protagonist William of Baskerville loses his faith after recognising the implacability of the material world. Rather than tend towards meaning, there is only chaos:

I have never doubted signs, Adso; they are the only things man has with which to orient himself in the world. What I did not understand was the relation among signs […] I behaved stubbornly, pursuing a semblance of order, when I should have known well that there is no order in the universe.[2]

In the infinitude of signs and their relationships only a fool, Baskerville understands, would conceive that they could see meaning.

More data simply brings more information to interpret. The human body is opened up again to a new mode of inquiry and comprehension, but this evidence is never complete.

For me the material nature of this printed ‘translation’ of the human is both terrible and wonderful. It is terrible, because it approaches the sublime awesome quality that Borges ascribed to his library, where staircase ‘sink abysmally’ (p. 78). It is wonderful because if represents another doomed attempt to articulate and express the multitudinous human. Like Borges’s library it seems both rational and insane at the same time. Looking at it is incomprehensible.