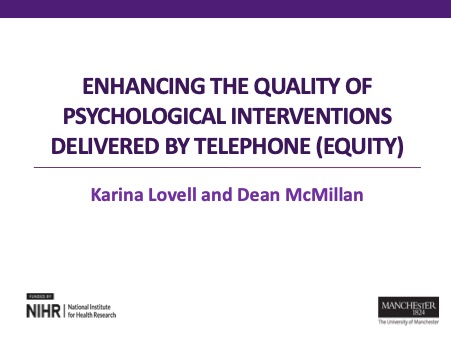 For the last month or so, Karina Lovell and I have been running the workshops for the feasibility stage of EQUITy. The aim of these sessions was to use what EQUITy had learnt from the early phases to help improve the quality of telephone-delivered treatment in IAPT services. This was very much about building on existing skills, because it’s clear that the Psychological Wellbeing Practitioners taking part in the training were already confident an
d skilled in using the phone.

EQUITy had originally planned these as two days of face-to-face workshops, but the Covid pandemic prevented this. Instead, the sessions were boiled down to two three-hour sessions delivered virtually. We thought that three hours was about as much as was possible to prevent ‘zoom doom’. Karina took the lead presenting and I chipped in and kept an eye on the chat section. We started with workshops for Cambridge IAPT and Bradford IAPT back in December and finished with Pennine IAPT in January.

As always, you learn all sorts from taking part in these sessions. The role plays we did with participants really brought alive for me just how much verbalising of empathy was needed to get the right amount. What may have felt a bit over the top if you did it face to face felt right when there was no non-verbal way of expressing empathy (we always switched the cameras off when doing the role plays to make it feel more like a telephone call).

I was also struck by how possible it was to do the workshops virtually. The breakout rooms worked well for the role plays. Everyone seemed engaged, asking lots of questions either through chat or by unmuting.

Finally, I want to mention the role Elinor Hopkin, Research Administrator for EQUITy, played in organising all of the zoom calls, which soaked up hours of her time. She was also kind enough to stay on every call for the entire three hours to deal with any IT issues – crucial because Karina and I are not in the least bit tech savvy. She also managed the breakout rooms and kept an eye on the time, so we had a break after an hour. On this last point, though, Elinor was rarely needed. Karina likes to present from her sofa and over the hour had a tendency to slip down it a bit, so less of her head could be seen on the screen. When only Karina’s forehead was showing, the hour was up. This was accurate as an egg-timer. It never failed in its accuracy.

I’ve really enjoyed helping out with the training and I’d like to thank all of the Psychological Wellbeing Participants for making it such an enjoyable experience.