A quarter of the cohort had not yet achieved any qualifications, mainly due ot their age (data were collected before the GCSE examination period). Those who gave us the highest level of qualification achieved so far had achieved well with most at or above GCSE grade C, a benchmark for progression to further study. Fifteen of this group of high achievers already had qualifications at A level or equivalent.

Of the six who told us they were working, four were also in education. These young people were all well qualified at GCSE grade C or above while working, mostly part time. Over time we will be tracking the progress of all this cohort and those who supplement it , following their educational and career pathways for the next 4 to 5 years.

The cohort were very confident about their future employment chances (n=88) with the average rating of confidence being 5, on a scale of 1 to 7 and two thirds answering in the highest 3 levels of confidence. 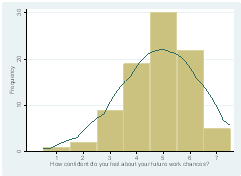 These levels of confidence in future employment were not affected by gender, age, ethnicity, degree of deafness or with/without additional needs. They were however affected by well-being.

If you want to join The READY Study, please complete this survey