This online exhibition shares the stories of five girls, all born between 1939 and 1952. They were teenagers and young women between 1956 and 1974, a time of huge social, economic and cultural change in Britain. We often think of the teenage years as being a particularly exciting time of life, so what was it like to be a teenage girl during these years?

The country was moving out of the hardship of the post-war period, with a new National Health Service and a booming economy. Children (even girls!) were staying on longer at school and then entering a buoyant job market.

Teenagers had lots choice about how to spend their money. Department stores sold off-the-peg clothes, from miniskirts to flares. You could listen to Motown, Hendrix or Dusty Springfield, and go to the cinema or a coffee shop or a club.

Some changes were particularly important for women. In 1967 it became legal for any woman to be prescribed the contraceptive pill, or to have an abortion. The Divorce Reform Act in 1969 made it easier for women to leave unsuitable marriages. Women campaigned for equal pay and against discrimination in the workplace.

What a time to be a teenage girl! Or was it? This exhibition is based on our research with women who lived through the ‘swinging sixties’ as teenagers. Click on the images below to read their stories and see what it was really like to live through these times.

We hope you enjoy this online exhibition based on our research. We would love to hear your feedback. Please email Hazel Burke with any comments.

All illustrations are by Candice Purwin. Thank you to all the women who shared their stories with us. We have changed real names and some other details in the stories in this exhibition.

‘Then and now’ photo blog 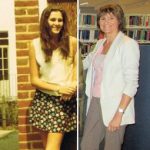 For more stories from this special cohort of women born between 1939 and 1952, have a look at our ‘Then and now’ photo blog.

If you are a woman born between these years, you are very welcome to be part of our blog. See our ‘Take part‘ page for more details.