The Art of Peace / Home / About / Research / Colombia

Despite the Peace Accord in 2016 between the Government and the FARC, Colombia continues to be affected by violence and a fragile peace process. The rising number of murders of social activists and community leaders and the institutional crisis caused by President Duque’s refusal to sign the The Special Jurisdiction for Peace (JEP) legislation are representative cases in point. A key feature of the Peace Accord, the JEP, is designed to address justice for the victims of violence and human rights abuses. 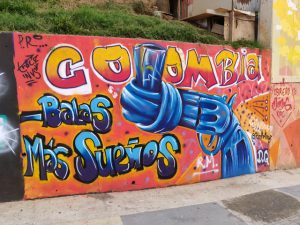 The city of Medellín has been a protagonist in Colombia’s conflict as a site of state sponsored violence, paramilitary and drug cartel violence. It has also been a host, receiving fleeing civilians from rural conflict areas in the Antioquia province and beyond. Whilst the murder rate in the city has descreased dramatically since the height of narco violence in the early 1990s, thelegacy of violence remains and today manifests primarily in the form organized criminal gangs. Boys and male youth are at particular risk of being recruited by organised criminal gangs in the city. As a consequence, male youths are likely to be both perpetrators and victims of violence. Indeed, half of murders victims in Medellin were aged between 14-28 and male in 2018.

Against the background of a complex, enmeshed and sustained violence, Medellin emerged as a key site for arts based community social interventions and peacebuilding. These movements have promoted diverse interests such as peace, democracy, plurality, solidarity and the preservation of community memory though arts and culture.

Thus, the case study aims to explore the role of arts based community groups play in promoting peace in their localities. In doing so, the case study will chart how and why art emerged as a response to violence, the diverse socio-cultural, political and economic functions it undertakes in promoting co-existence and peace. Furthermore, the research seeks to understand how these community arts initiatives have interacted with formal public policies for peacebuilding in the city.