The Art of Peace / Home / About / Research / Lebanon

Eight years into the Syrian war, Lebanon remains the country hosting the largest number of Syrian refugees per capita. While the Syrian displaced population exceeds 1.5 million, Lebanon also hosts atleast 450,000 Palestinian refugees most of whom live in one of the 12 existing refugee camps. The legacy of the Lebanese civil war (1975-1990) and Israeli military invasions (1982, 1996, 2006) continues to sustain the internal displacement of many communities from South and Mount Lebanon, most of whom have found home in proximity to Palestinian refugee camps in Beirut. Furthermore, the recent displacement of Armenians, from Syria to Lebanon, a century after their survival from the 1915 genocide is a reflection of fluid societal change through which the longstanding tensions in the region has become more apparent. 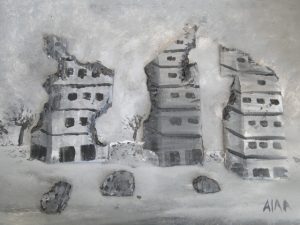 This perpetual state of displacement has created new geographies of activism with a profound impact on the relationship between aesthetics and politics. In particular, the displacement of communities from Syria has fostered a political collectivity through creative tactics and various forms of social critique. In response to the official narratives of the Syrian war which has been selectively recorded, manipulated and suppressed, artists and activists have been using a combination of creative and political practices to reclaim the right to ‘self-representation’ and engage with arts as a medium of documentation, expression and mobilisation in times of change.

The Art of Peace project adopts the idea of ‘peace formation’ (Richmond, 2013) to assess the potential of a grassroots art-based initiative in achieving social transformation and analyses the many ways the affected communities have creatively responded to conflict. In doing so, the project engages with community activists and artists in documenting grassroots art works, locally produced video documentaries, music, performative practices and audio-visual media. Far from romanticising peace, the project draws on the importance of problematising and conceptualising the meaning of peace. It reflects on the micro geographies of peace and counter spaces of resistance for communities characterised by repeated cycles of displacement, disintegration and dispossession and draws on the various art-based practices and expressive forms of collectivities aimed at mediation, accommodation, and reconciliation. Through mobilising creative processes, the project strives to unsettle the privileged location of academic knowledge production and recollects embodied feeling of exile, displacement, transition and continuity as experienced by different actors.