Lizzy Spencer is an Early Career Researcher, who works on material culture, consumption and gender in the long 18th century. Between April and July 2018, Lizzy held an Early Career Fellowship at the John Rylands Research Institute, and her project was focused on women and accounting between 1680 and 1830. Here she talks about her experiences at the JRRI and how the fellowship has helped her to develop a larger postdoctoral project.

In the summer of 2018 I was lucky enough to spend three months as a Visiting Early Career Research Fellow at The John Rylands Research Institute, where I worked on a project titled ‘Elite women as accountants, 1680-1830’. This project arose directly out of my doctoral research on women’s clothing in eighteenth-century England, which raised a number of wider issues concerning the use of accounts as a source. In particular, it highlighted the intertextual processes of women’s accounting by showing that information was moved across and between different texts. Though account books have formed a staple source in studies of women and consumption over the years, these processes remain largely overlooked. By drawing across a number of sources including account books, bills, receipts, notes, drafts, and correspondence, my project aims to recover them.

During my Fellowship, I therefore scoured the various collections of family papers held in the Special Collections at The John Rylands Library for documents relating to women and accounting, focusing on the elite as the group most likely to have left traces of these activities behind. Though I looked across a number of collections including papers belonging to the Dale, Egerton, and Stanley families, my research focused on the Grey (Stamford) of Dunham Massey Papers. In particular, I looked in detail at the papers of Mary Countess of Stamford (1704-1772) who managed the estate of Dunham Massey from 1758 until her death, as well as papers belonging to a number of other members of her family.

Thanks to the knowledge and kindness of the staff at The John Rylands Library – and of John Hodgson in particular – my research yielded a huge amount of relevant material. This was especially the case for documents relating to Mary Countess of Stamford, who is a fascinating figure. Though she was married, Mary managed her estate in her own right, and it is clear from her papers that she was extremely adept at doing so. In addition to her financial papers, I was able to look at correspondence dealing with matters relating to the estate of Dunham Massey. In 1765, for example, Mary wrote to her neighbour to admonish him for issuing a warrant to hunt game on her land, while she wrote to another neighbour in 1768 to bemoan ‘ye destruction of young Timber & Trees’ in the woods. 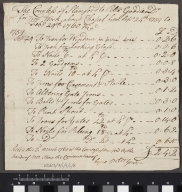 This research enabled me to develop a project which was in the very early stages at the start of my Fellowship, and to shape and strengthen my key research questions. For example, though I began by focusing on elite women, over the course of the Fellowship I became increasingly interested in female accountants from further down the social scale. One such woman was Hannah Prinsep, the housekeeper at Dunham Massey, who kept accounts for the household between 1813 and 1816. Though her employer the Earl of Stamford inspected and signed them, the accounts were kept in Prinsep’s hand, and bills for goods like soap or candles were usually addressed to her.

I also became interested in how historians might interpret account books where entries have been crossed out, deleted, or recorded incorrectly. For instance, I looked at one account book kept by Mary Countess of Stamford between 1768 and 1772, which records debit and credit accounts with several people. Most of the entries in this book have been crossed out, presumably when the accounts were balanced and settled. Similarly, in household account books from Dunham Massey dating from 1760 to 1773 – which were inspected and signed by the Countess when she was in residence – many entries have lines through them, some pages have been removed, and mistakes are pasted over with new pieces of paper. Towards the end of the entries for 1773, a note pinned inside the book even reads ‘When you write these and the following Weeks out of this Book into the new Book remember to change the red Port only 1s:6d a Quart – and to keep the new Book very clean’. This demonstrates that information was moved across different texts – in this instance into a ‘new Book’ – during the accounting process.

I continue to explore these questions in my current research, as the work conducted during my Fellowship now forms part of a wider postdoctoral project titled ‘Women and Accounting, 1680-1830’. I have already been successful in securing further short-term funding for this research, and I hope to develop a bid for future funding on a longer-term basis in collaboration with The John Rylands Research Institute, as there remains a huge amount of relevant material in the Library’s collections which I have not yet looked at. The John Rylands Library was a wonderful place to work, and I am very grateful that the Fellowship gave me the opportunity to participate in and contribute to the scholarly community there.

Touching the past: Using letters and printed works to reconstruct literary communities and study the...
The Making of an Anti-Slavery Anthology: Mary-Anne Rawson and 'The Bow in the Cloud' (Part 1)
ECR spotlight: Drew Thomas