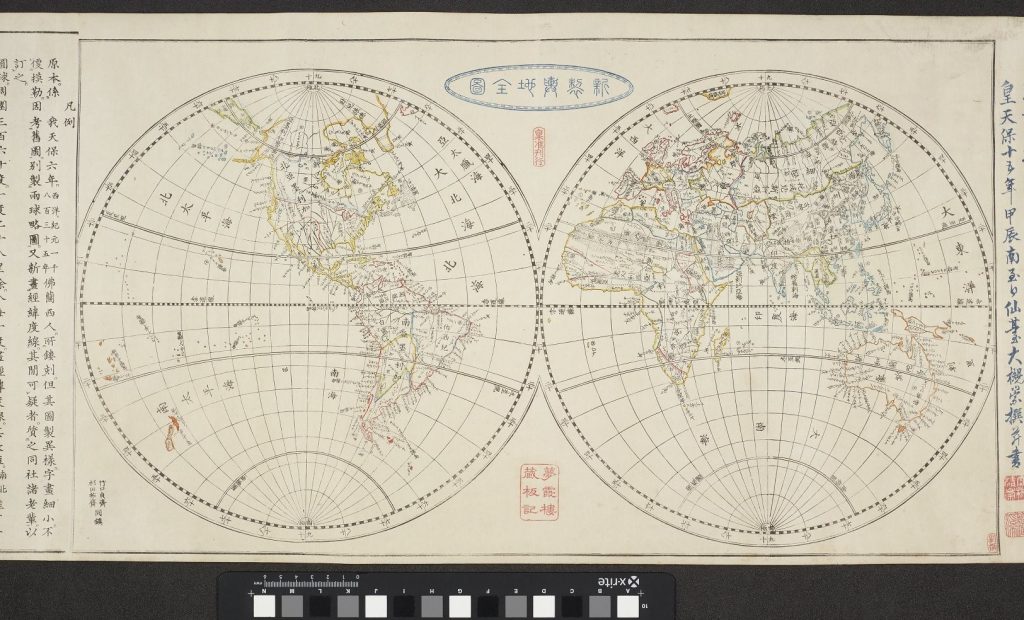 Dr Sonia Favi is a Marie Sklodowska-Curie Fellow, who works on Tokugawa period (1603-1868) Japanese history. She is currently using primary sources such as administrative and commercial maps, travel guides, pictorial representations of travel (especially ukiyo-e prints, travel diaries and narratives, in order to investigate the cultural, ideological and social impact of domestic travel within Tokugawa Japan.

At the beginning of the seventeenth century, the idea of “Japan” wouldn’t have meant much to the majority of the population of the Japanese archipelago. Since the mid-fifteenth century, the country had been divided into micro-states, governed by independent samurai (warrior) lords. Even before that, for centuries, local rulers had maintained a high degree of autonomy.

In 1603, a semi-centralized state was established, structured as a political balance between a central military government (bakufu), led by the Tokugawa family, and around 250 semi-autonomous local domains, assigned to vassal families. It was the beginning of the Tokugawa era (1603-1868). The Tokugawa safeguarded the new political stability in various ways. One of them was control over movement: they applied restrictions to contacts with the outside world, and regulated travel within the country, limiting it to the essential (click here to read more about travel within Tokugawa Japan).

All the same, in a context of growth and increasing economic specialization, a national trade network soon developed, relying on sea routes and on a well-maintained road system. Alongside other products, books and prints began to circulate, from cities to the remotest areas, in connection with the rise of commercial publishing and with an expansion of readership.

By the end of the Tokugawa era, materials now labelled as chishi (topography) – travelogues, travel guides, encyclopaedic geographical works, maps and other visual sources meant to illustrate the characteristics of given areas – had become especially popular. In my research, I have been focusing on chishi from the Japanese Collection of the John Rylands Library, to understand how the circulation of these materials related to the restrictions on physical movement, and how it impacted the cultural and intellectual landscape of Tokugawa Japan.

The Rylands Library possesses, for example, a copy of a map of Japan which appeared in many editions in the seventeenth and eighteenth centuries: Honchō Zukan kōmoku, by Ishikawa Tomonobu (first published in 1687).

Commercial maps of the Japanese state (representing the islands of Honshū, Shikoku and Kyūshū, which, at the time, constituted its mainland) were commonly produced in the seventeenth century – and presumably turned “Japan” into a more familiar notion for the Tokugawa public. They tended to conform to a standard iconography, which gave prominence to provinces: they were usually clearly bounded, named, and sometimes highlighted with different colours within the maps. 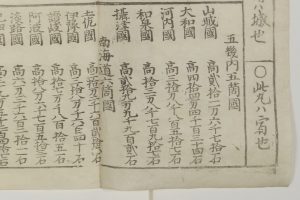 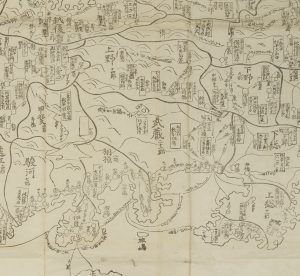 Detail of provincial borders. At the centre is the province of Musashi 武蔵, where Edo, the Tokugawa capital, was located.

This was neither a “natural” nor a neutral choice. Provinces were an outdated administrative division: they had been established when Japan was first founded (as an imperial, centralized state) in the seventh century A.D., but with the rise of local autonomy they had progressively lost their administrative relevance. In spite of that, the Tokugawa government usually compiled its administrative maps of Japan as a collation of provincial maps. The choice had symbolic weight, as it promoted a centralized state model: representing Japan as an ordered and immutable unit, isolated on the map and dominated from above, worked as an effective political statement. This narrative was, in a sense, an intellectual companion to the policy of control over physical movement. 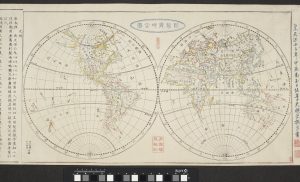 Tomonobu’s map adheres to this static model, “quietly” submitting to the intellectual authority of the Tokugawa. However, some of its features respond to more dynamic market demands. First of all, a number of foreign countries, such as Korea, appear at its borders. Sea routes to them are marked, complete with distances. The map also includes a table, listing distances to faraway cities and countries (including Holland, the only European country allowed to maintain commercial relations with Japan under the Tokugawa’s restrictions).

Foreign lands were notably absent from early Tokugawa administrative maps: Japan appeared as isolated on paper, as it was, ideally, in foreign policy. On the other hand, commercial maps tended to cater to an intellectual interest towards external worlds, which defied the restrictions on foreign intercourse. The same interest was reflected in world maps, produced ever since the mid-seventeenth century, as well as in publications of different sorts, such as popular encyclopaedias.

Tomonobu also provides up-to-date and practical information for his buyers. He lists the names of local lords and the estimated productivity of their domains (put in rectangular labels, within the provincial boundaries), providing a more realistic vision of the political structure of the country (and posing an implicit challenge to the narrative of unity promoted by the bakufu). He, moreover, includes a table, listing travelling distances on the main highways of Japan, starting with the busiest one – the Tōkaidō, which connected the cities of Edo and Kyoto. Roads appear on the map as lines with intermittent dots, associated to the names of their post stations. 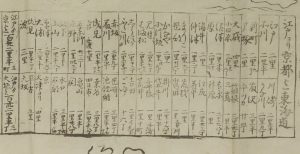 This was probably, again, a response to publishing trends. Already in the seventeenth century, charts providing travelling distances, costs, and other practical information for moving along the highways had become a high-demand product. Moreover, even for those who didn’t embark on travel, and even before the restrictions over movement loosened, the highways had become an object of curiosity and artistic interest. Official administrative road maps, for example, had evolved into elaborate pictorial commercial maps, which didn’t refrain from showing travellers of various social backgrounds mingling on the road. 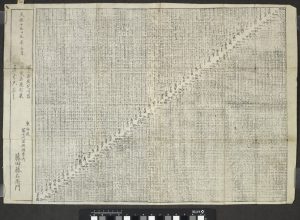 Maps like the ones above provided “virtual” means of exploring and domesticating the Japanese territory, even when physical travel wasn’t possible.

In this sense, in the Tokugawa era, chishi could turn spaces hitherto unfamiliar to the majority of the population – scenic spots, religious sites, cities, roads, regions, even the whole country – into recognizable places, visualized through mappings, pictures, and descriptions. These materials had, therefore, the potential to push the idea of “Japan” into a more commonly shared cultural ground. At the same time, they could be culturally and intellectually divisive, as they offered ways to challenge official, immobile and uniform notions of space.

This project has received funding from the European Union’s Horizon 2020 research and innovation programme under the Marie Skłodowska-Curie grant agreement No 794595.