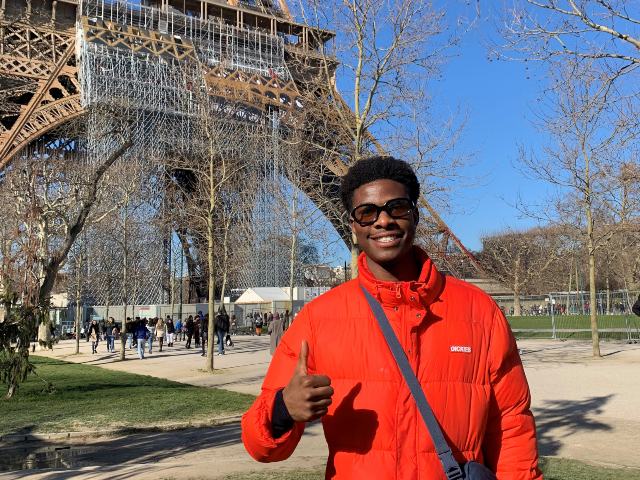 Emmanuel discusses why he chose to study Politics and French

Greetings! My name is Emmanuel Omoniyi and I am a second-year Politics and French student at the University of Manchester. Studying at Manchester took quite a few twists and turns for me because I originally planned to study medicine just before the lockdown. However, it was at this time that I developed a huge passion for languages rather than taking care of human beings, which led me to learn French and Italian. I also took a gap year and travelled for a bit to Togo which allowed me to develop my French further and take an interest in Politics, particularly West African politics. These two new passions of mine left me with the choice of studying Politics and French, but I chose Manchester specifically because of its flexibility in modules, its relationship with the incredible Alliance Francaise and because Manchester is a great student city that has so much to offer.

First year of Politics and French has five compulsory modules. Three in French and two in Politics but there are others you can choose for politics. These compulsory modules are just to put everyone on the same page as people may have different qualifications to get into Manchester. This made me appreciate the freedom of the second year, as there were many more modules to choose from which were all extremely interesting. My favourite two from the first year were definitely ‘British Politics: Power and State’ and ‘French Identity’ because the lecturers for them were engaging and the content was very current. I was able to see how unsurprisingly controversial the French and British just are. The modules I’m looking forward to this year are Environmental Politics and Gender and Sexuality in French Cinema. Additionally, I have a free choice module this semester so I chose Italian Culture which allows me to couple my Italian with knowledge of its culture and history.

As a student in Manchester, it can be hard to have a healthy ‘student life’ because it’s easy to find yourself having lots to do and being out a lot or not having much to do and wanting to stay inside. It’s all about balance. I think working gives you a healthy structure, the university provides jobs as student ambassadors and being involved in society can do the same thing. Try to get out of the uni bubble and do things not directly tied to the university so you can get a true understanding of Manchester and its culture. I try to play football in different areas in Manchester, study in different places and try new food places around the city too. I wish all the best to the offer holders! I’d also like to say to not worry too much about accommodation, they’re all pretty great and you’re bound to have a good time wherever you are.