Naomi Billingsley, Leverhulme Early Career Fellow at the JRRI and one of the Lives of Letters team, writes:

Blake’s letters are an important resource for scholars of his work for a number of reasons, including:

One of Blake’s letters that has been relevant in some of my recent work on him includes a poem that is itself also apparently autobiographical: in a letter of 14 September 1800, Blake wrote to his friend Ann Flaxman, wife of the sculptor John Flaxman, after a visit to Felpham, West Sussex, to where the Blakes were to move from London later that month.

The letter includes a poem which seems to be an account of a vision that Blake experienced during his visit to Felpham. One verse is of particular interest to me, as someone who works on Blake’s pictorial works:

The description of a spiralling ladder of angels corresponds to the design of Blake’s watercolour Jacob’s Ladder (c.1799-1806; illustrated below) – one of about eighty watercolours that Blake produced depicting subjects from the Bible. The precise date of the watercolour is not known, but its similarity of the description in the poem suggests that it could have been inspired by the vision that Blake experienced during that visit to Felpham. 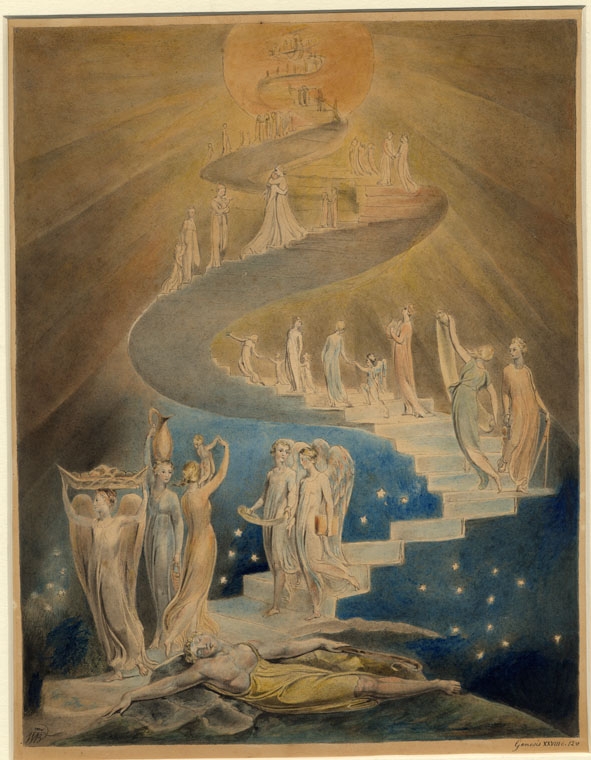 The similarity of the poem in the letter to the watercolour prompted me to include the figures from the watercolour in a virtual tour of Blake’s cottage in Felpham that I curated for The Big Blake Project (Jason Hedges of Immersive Design did the technical work of the tour).

The tour can be viewed on any device, including with VR goggles if you have them to hand.

I’ll be writing a post about how I’ve used another of Blake’s letters in another project in the new year.

In the meantime, you can discover more of Blake’s letters via the digital editions in the William Blake Archive.

Blake fans in Manchester may also be interested in the Whitworth Studies lecture this Thursday, 30 November (5.30-7pm): T J Clark, ‘”I have said to the Worm”: Hazlitt on Turner and Blake’.