On 14 June 2019, the Symposium entitled “Brazil: Resistances to the Far-Right” will be held at the Conference Room of the Graduate School, University of Manchester. Guest speakers include Jean Wyllys, the openly gay Brazilian human rights activist  and congressman of PSOL (Socialism and Freedom Party), who is now in exile; and Tereza Campello, Minister of State under the Lula and Dilma governments. They will join scholars and activists to debate the current socio-political state of affairs in Brazil and strategies of resistance.

The short documentary I Will Not Be Interrupted about Marielle Franco, directed by Débora McDowell and Jamille Dias, will be screened for the first time in the UK, followed by a Q&A session with Jamille Dias. The documentary follows the family, friends and former advisors of the councilwoman Marielle Franco, a year after her assassination in Rio de Janeiro, through the grief and activism of the women around her, tracing Marielle’s legacy as a source of inspiration for Black and LGBT communities in Brazil and globally.

Please find the poster below. The programme will follow soon!

The symposium will be in both English and Portuguese, with simultaneous interpretation available.

Thank you very much.

– Dr Jamille Pinheiro Dias, postdoctoral researcher at the University of São Paulo and translator. She works on topics related to Amerindians, gender and sexuality, and political activism. Her translations include works by Luís Inácio Lula da Silva, Marielle Franco, Pussy Riot, Judith Butler, Eduardo Viveiros de Castro, among others. Together with Débora McDowell, she directed the short-documentary “Não serei interrompida” (I Will Not Be Interrupted).

– Dr Lisa Katharina Grund, anthropologist, is a postdoctoral researcher at the Museu Paraense Emilio Goeldi, Brazil, and the Leibniz-Zentrum Allgemeine Sprachwissenschaft (ZAS), Berlin, Germany. She is currently also Honorary Research Fellow at the Department of Social Anthropology, University of Manchester. She works with Amerindian peoples in the Amazon regions of Guyana and Rondônia, Brazil.

– Gabriel Cambraia Neiva, is a Ph.D. Candidate in Latin American Cultural Studies at the University of Manchester, under the supervision of Prof. Lúcia Sá. Awarded with the PDS Scholarship, his research investigates the interface of national literature and Amerindian orality in the Guianas. 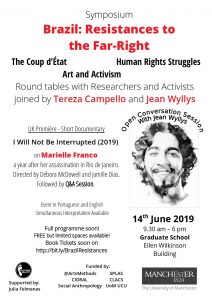