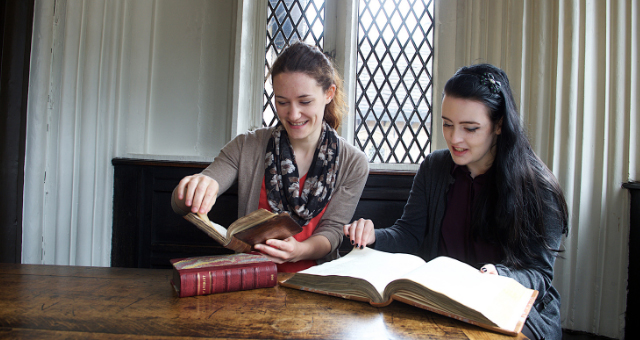 What it’s like to study English Literature and German

I’m in my second year studying English Literature and German and the reason I chose to do a joint honours, is because it allows me to delve deeper into two subjects I love.

The programme at Manchester has a lot of freedom with regards to how you choose your modules. In first year, most of them were mandatory, which gave me a good foundational knowledge of both subjects. Going into my second year, I had virtually complete free choice of modules – apart from my German Language, which was compulsory. This meant I could begin to specialise in the areas I found most interesting.

The course is a mixture of lectures and seminars, and they teach you alternative ways to approach texts, as well as how to examine them more closely. One of my highlights has been reading Paradise Lost – something I’ve always wanted to understand in depth because of its impact on western Christianity.

I’ve found studying German really rewarding, as not only am I gaining a new practical skill, but the course is designed to give you a better understanding of German history and culture; something that’s paramount when studying a foreign language. Last year in the German literature and history module we read works by some of the country’s most famous authors, such as Kant, Freud and Marx… in German. Something I never thought I’d be able to do! We also went on a trip to Chetham’s Library where Karl Marx and Friedrich Engels wrote the Communist Manifesto.

I’ve also done a linguistics module, which was a completely new experience for me as I’d never studied anything like it before coming to university. It’s made me much more aware of how language works and similarly, how we’re bound by the languages we speak.

I’m really glad I chose this degree – I’ve learnt so many new things and had the opportunity to go to many exciting events organised by the societies of the courses I do, which has really enriched my learning experience. Next academic year, I’ll be travelling to Germany to complete my year abroad. There are three options for this time; you can either study abroad, work as a teaching assistant through the British Council, or find a work placement which gives you the opportunity to do what best suits you. I’m hoping to either find a work placement or study. I’m really excited to spend a year in Germany improving my language and embracing the culture!