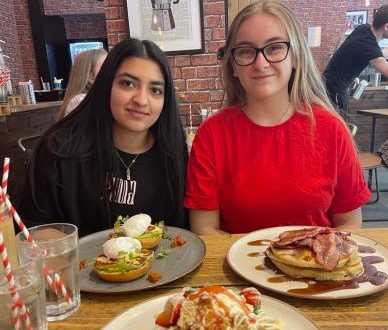 Hi, my name is Emerald, I’m 19 and I’m a second-year student at the University of Manchester. I study single honours French Studies and this year I am taking 20 credits of Archaeology as a “free choice” unit. This is a blog about what I did during Welcome Week! 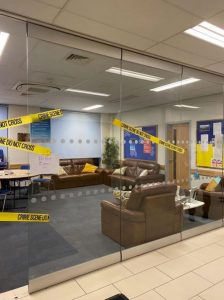 Today was a Bank Holiday for the Queen’s funeral, so I didn’t really leave the house during the day. The night before I had watched TV with my flatmate until quite late, so I laid in until 11am and had a lazy morning! Around 1pm, I made myself some lunch and ate with
my flatmates. I had bought some fresh bread the day before so I ate it today with cold meats, cucumber, tomatoes and feta cheese – so yummy! My two flatmates (the fourth one moves in on Sunday) and I watched a couple of hours worth of the Queen’s funeral. In the evening, I went to 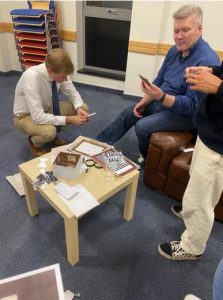 see some of my other friends and we did an online Escape room. You order a pack online and then they send you all of the decorations, clues etc. There were about 30 of us that were there and we were split into 5 groups of 6. The escape room was Arsène Lupin themed (Lupin is a famous fictional thief in French storybooks) and so the challenge was to find the Van Gogh painting stolen by Lupin. The last 5 clues were French audios so I could translate them for our team, however the other teams would have had to spend more time google translating them. The final clue told us where the painting was hidden and so we went and found it, and won with 25 minutes to spare! It was a lot of fun. When I returned home at about 9:30pm, my flatmates and I decided to start watching The Crown (since we had watched the funeral earlier and were discussing the royal family). It’s excellent, I would fully recommend watching it. 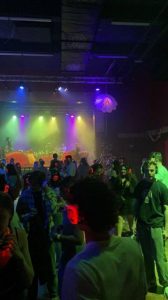 Today, I read a lot. I have been reading L’Etranger by Albert Camus recently. I’m about halfway through it now. It takes me longer to read in French than it does in English because I like to annotate it and make chapter summaries. I’m really enjoying this book so far. It’s quite famous and is a common book for people learning French to read because it doesn’t use language that’s extremely complicated. So, for anyone learning French, L’Etranger is really interesting! In the evening I went to work. I work 3 hour shifts, 6 times a week. I work for FoodInResidence at Hulme Hall, serving food to students who live there and then cleaning afterwards. It’s the perfect job for a student and my co-workers are really nice. After work, I came home and ate dinner (tuna pasta bake that my flatmate kindly cooked while I was away), before getting ready to go out. We went to a Silent Disco Freshers event at the Students’ Union. It was good fun.

This morning I got up fairly early and went for a walk around campus before it got busy later on. I love how pretty the campus is. I think my favourite bit of the campus is the Quadrant or Brunswick Park. Then I came home, did some work in preparation for classes starting next week and read my book some more. I checked my timetable, saw what buildings I am in for each
class, checked on Blackboard for any updates and saw if I had any work to do in advance for my modules. I’m happy with my timetable for this Semester and I’m looking forward to classes starting again and getting a proper routine going. In the evening at 7:30pm, I went to my church. We had an hour service and then afterwards we played board games, ping pong, table-football and ate picky bits. After church, I watched another episode of The Crown with my flatmates.

Today I did some housework, video-called my Mum and sister and also spoke to my friend called Taylor who lives in the USA. She’s just 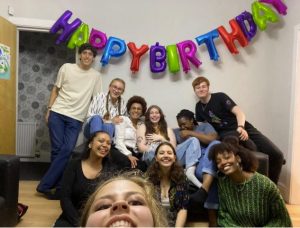 started college so she was telling me about her classes and how she is finding student life. In the evening, I went to work again. The 3 hours passed so quickly today! I came home as fast as I could afterwards, got changed quickly and then one of my flatmates and I went to our other friend’s house for their birthday party. We played card games, Uno, some of them played “gin fling” (a gin version of beer pong because they don’t like beer) and then we just chatted for hours and hours. We had the best time. 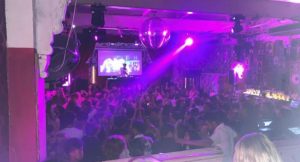 This morning I rested after not driving home until 3:30am after the birthday party. I
met with one of my best friends, Angelena, at “19 Café Bar” in Manchester City Centre. This place does the BEST breakfast food, and it’s not too expensive. In the afternoon, I watched the French film “Seules les bêtes” and read a couple more chapters of “L’Etranger”. In the evening, me and my two flatmates went to a club called “Deaf institute” for a 2010s music night. Deaf institute is possibly my favourite club to go to! It’s close to campus, the music is always really good, they have themed nights (for example, I went to a breakup songs night last year) and I have some really good memories of there from my first year of University.

Today was mostly taken up by work. I worked from 11-2pm. Then I went home, picked my flatmates up and we did our weekly food shop at Lidl (we go to the one in Longsight) before I went back to work at 4:30pm and worked for another 3 hours. While I was at work, our 4th roommate moved in so I was so happy to see her when I got home! We haven’t seen each other since before the summer holidays. Our friend, Ananya, came round to our house for a couple of hours to eat dinner with us. All 5 of us chatted and watched an episode of The Office before I dropped Ananya back off at her place. 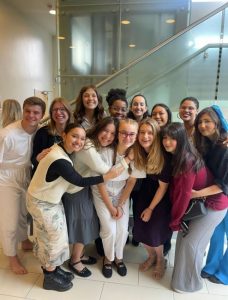 Today was a really special day for me, I was baptised today! The celebration lasted until about 4pm so I quickly drove home, got changed into my work uniform and headed off to work. Work was good fun this evening, it wasn’t a normal dinner service in the dining hall – it was a BBQ outside. We had music playing and beanbags for the students to sit on. Plus, the students ate off paper plates so I didn’t have to wash up any pots afterwards! After work, I packed my bag ready for class tomorrow and decided to get an early night after watching another episode of The Office. Year 2, Semester 1 starts tomorrow!