How would ‘free borders’ encourage equality and promote an acceleration in economic growth?

Across our world, borders are controlling the imports and exports of a country’s goods. The question we ask is whether the sentient human should be considered as an export, is this humanly just? Border control has never been as strict as it is today; factors such as the ‘Brexit’ vote, the fear of terrorism and the significant increase in the world’s population over the last century have all triggered this sudden urge to be more controlling of what comes in and out of our country, referring to the flow of people. Should a world that is considered ‘free’ be this controlled? Can a person considered free if they are unable to go where they please? 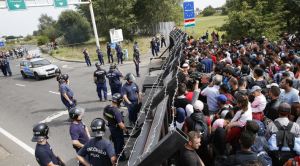 The EU is closing the borders

Across the Western world, the rising populist right is pointing the blame at established elites for letting too many immigrants in. The populists complain that the immigrant’s lower average wages dilute the local culture and pose a threat to national security. But even as anti-immigrant sentiment gains ground, a growing band of open border advocates is moving closer to the opposite conclusion. Those Western elites aren’t letting in too many immigrants but instead they are letting in too few. These advocates called for a regime of nearly complete freedom of migration worldwide, with the exceptions for preventing the outbreak of terrorism or the spread of contagious diseases.

In this fictional world, borders would still exist but they would act as jurisdictional boundaries rather than as barriers to control human movement. The end of migration control through these borders could reduce global poverty (could be combated on a truly global level for the first time, a bold program for social equity), increase liberty and there would be acceleration in economic growth. This concept may be seen as a naive utopia, but the mobility without borders is already a reality, the European Union is a prime example of this.

As I mentioned briefly, what we are currently seeing is not too much, but too little international mobility. The common fear amongst the majority in the UK’s population is that the ‘rich’ countries are threatened by large inflows of migrants, which is completely unfolded. The real migration potential under free movement is grossly overestimated. It is shown that ‘97% of the world’s people live in the country where they were born’, that 97% is the exact same figure seen in the year 1900! This is not an indication that globalization is sweeping the world.

It is also argued that workers who move from a poor country to a rich country become far more productive as they join a labour market with ‘ample capital, efficient firms and a predictable legal system.’ Labour is argued to be the world’s most valuable commodity and yet due to our strict immigration regulations (even stricter than before), most of it goes to waste, missing out on trillions of pounds/dollars. What might happen if borders were open? To clarify, ‘open borders’ means that there is free movement for people from country to country to try to find work, it does not simply mean no borders, there will always have to be some control to ensure national security. If there was an opportunity to earn $78 trillion through free movement, should liberals not be jumping at this chance and be prepared to make a big political compromise to bring it about?