Stephen Parker and Matthew Jeffries  (German) were recently been awarded a Leverhulme Project Grant for their project ‘Double Agent: Heinrich Simon’s Constitutional Mission in Neo-Absolutist Prussia’. The three-year project, which began life as a small seed-corn project funded by the JRRI, will examine the papers of Heinrich Simon (1805-60), the only leader of the German 1848 Revolution who remains largely unresearched. Here, Stephen talks a little about who Heinrich Simon was and what led them to research him.

A particular German-Mancunian linkage underpins our interest in the German-Jewish lawyer, civil servant, politician and author Heinrich Simon (1805-60), the only leader of the German 1848 Revolution as yet largely unresearched. Simon’s nephew, the Manchester industrialist Henry Simon, who endowed my chair, left the bulk of Heinrich Simon’s papers to the University of Manchester. Henry Simon also brought to Manchester the Great Seal of the Frankfurt Parliament, which the Simon family returned to the German people in 1991 following re-unification for display in the Reichstag. This symbolic act animates our project. 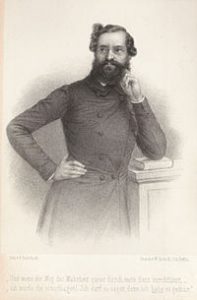 In the German lands as elsewhere on the Continent, the 1848 revolutions were a seminal event in the formation of modern Europe. 1848 promoted an agenda of national self-determination and constitutional government which aimed to establish citizens’ rights under the rule of law, essential properties of a civilised, democratic society. At a time when those values are being challenged from a number of quarters, 1848 – its defeats as well as its successes – remains an essential point of reference.

Like other reformist Prussian officials after 1815, Simon sought to negotiate the contradictions of the neo-absolutist state from within. A major concern was to redeem the pledge of a constitution made by Friedrich Wilhelm III on his return to Berlin following the defeat of Napoleon. However, the king backtracked, denying any significant sharing of power. Many reformers heralded Friedrich Wilhelm IV’s accession in 1840 as an opportunity to make good the pledge. However, the monarch’s feudal attitudes exacerbated tensions.

Simon rose to the challenges of those years with remarkable audacity. When he was invited to review the Prussian education system in 1841, his bold vision for vocational education was deemed unacceptable to established interests. His advice that the government should seek broad public support was anathema. In 1845 Simon resigned over legislation to curtail an independent judiciary – for him the cornerstone of any constitutional settlement – and joined the opposition. His tract of 1847, To Accept or to Reject?, mobilised popular opinion against the king’s constitutional decree. This contributed to the escalating climate of revolt, which ushered in the revolution and Simon’s prominent role in the Frankfurt Parliament. Following the Assembly’s dissolution, Simon pursued his constitutional mission from Swiss exile.

Our project will yield a digital edition of Simon’s papers, charting all stages of his life and work, three articles and a first critical biography.

Read more about the JRRI’s seed-corn funded projects on our website.

Early Career Research Fellow: Michael Smith
The Making of an Anti-Slavery Anthology: Mary-Anne Rawson and 'The Bow in the Cloud' (Part 1)
Artist in Residence: Rebecca Hurst